Topps Cards That Should Have Been: The Roberto Hernandez Chronicles 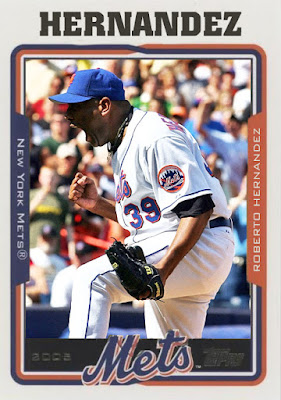 Once again, this series has become another opportunity to talk about closing pitching in the 90s and 2000s and how it was grossly under appreciated by the Topps flagship people.

Roberto Hernandez was another one of the more consistent closing pitchers of the 1990s. His killer 1996 season with the White Sox caught the attention of the league, which led to him changing teams every few seasons, including being one of the charter members of the 1998 Tampa Bay Devil Rays, and notching a career-high 43 saves with the 99 Rays.

After a few years of bopping around the Royals, Braves and Phillies, it became clear that Hernandez was being utilized more as a middle reliever than a closer, which wasn't a problem for him.

Heck, his best season in middle relief came with the 2005 Mets, where he had a 2.58 ERA in 67 games, with 61 Ks and even 4 saves in there covering for Braden Looper. You wouldn't know it, as Topps didn't make a Mets card of Hernandez in 2005 despite him playing the entire season there and signing there in January, but it definitely happened.

Thankfully, both halves of Hernandez' 2006 season, with Pittsburgh and New York, would be documented on Topps cards. I mean, the deal to bring him and Oliver Perez to the Mets for Xavier Nady was a pretty big deal, rightfully so.

However, they neglected to document any of Hernandez' 2007 season: 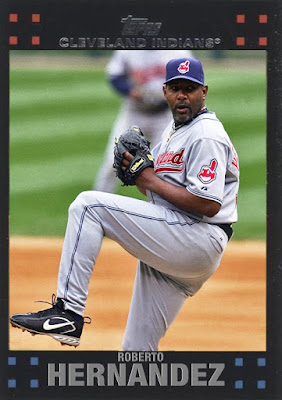 2007 was an odd one for the Cleveland Indians, as they employed two different pitchers on their staff named Roberto Hernandez. A starter, still going by the name Fausto Carmona, and the reliever, the 17-year veteran we're talking about today. Therefore it was very difficult to find Roberto Hernandez reliever photos for this custom, cause the starter had a bunch.

But, regardless, Roberto Hernandez continued his middle relief reign over whichever teams would employ him, and, after a strong 2006 season, looked to be a hot commodity for Cleveland. Ultimately, Hernandez' age caught up to him, and the 42-year-old mustered a 6.23 ERA in 28 games. As the Indians would make it all the way to the ALCS, Roberto Hernandez would be released in mid-July. 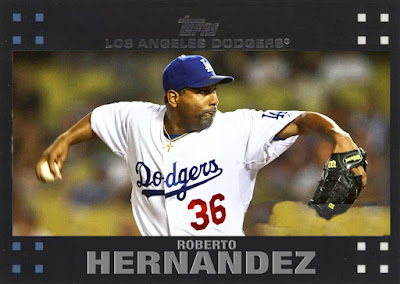 The Dodgers would be nice enough to pick Hernandez' up for the remainder of the year, where his ERA grew to 6.64 in 22 more games. Again, there wasn't a great deal left in the tank for Roberto Hernandez, but he was still a consistent, safe choice for middle relief for a team that was struggling for one of the last times before competing in the late 2000s and early 2010s.

After the season, Hernandez retired, and there would only be one Roberto Hernandez left in the league.

Labels: 2005, 2007, Dodgers, Indians, Mets, Roberto Hernandez, Topps Cards That Should Have Been