Topps Cards That Should Have Been: The Jeff Conine Chronicles 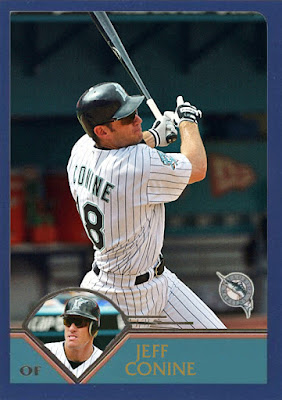 Jeff Conine won two rings with the same team, 6 years apart, two teams in between, and they were the club's only WS wins to date.
I dunno, I'm no Tim Kurkjian, but I think that's pretty cool.
Jeff Conine was best known not just for his Marlins year, being one of the first true Marlins heroes and all, but for batting directly before Cal Ripken in the Orioles lineup during the last few years of Ripken's career. When I saw the O's play in 2001, I got excited when Conine got up, because that meant Cal was up next. And Conine was pretty damn good with the O's too, with some solid contact seasons.
In 2003, Conine spends most of the year with Baltimore, but after the trade deadline, and after Topps has finalized their Traded/Rookies checklist, the O's ship Conine to Miami for Denny Bautista, in a minor waiver deal that gives the Marlins one of their marquee stars back right before they're about to absolutely dominate the postseason.
The deal works like gangbusters for Conine. Conine hits .353 throughout the entire 2003 postseason, with 22 hits, 5 RBIs and a home run. He helps the fish win their second World Series, then rides out the rest of the deal with the Marlins, spending two more years there and splitting after it runs out in 2005.
Conine then does the same thing he did the last time he was a free agent- he signs with the Orioles. 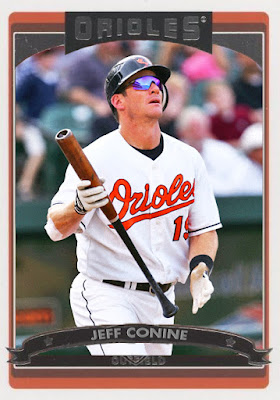 Granted, this is a late-career Conine with a last-place O's team, so he's doing this mostly as a victory lap. It's most curious to me that Topps didn't do a flagship card of him with the O's, as he's basically their starting first baseman that year, hitting .265 with 103 hits in 114 games.Yes, his positive WAR days are over, but he's a nice lineup asset for the O's in a season where nothing seems to be coming together for them.
Topps does depict Conine as a member of the Philadelphia Phillies in 2006 Update, and as a member of the Cincinnati Reds in 2007 Topps. Both stints are relatively uneventful. However, the Reds trade Conine one last time, also past the trade deadline, leaving us with a rather odd sight in 2007: 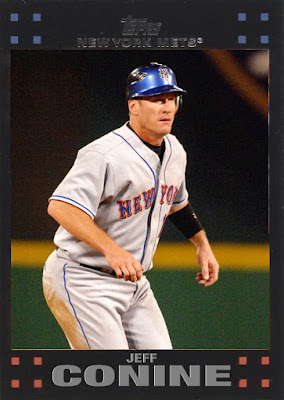 That's right. Jeff Conine, the Marlins and Orioles hero, played for the New York Mets. And Topps never got around to putting that on a card. The nerve.
His Mets tenure is pretty boilerplate, honestly. 21 games, a .195 average, 8 hits. Not much going on for Mr. Marlin out of his own tank. He retires after the 2007 season, signs a one-day contract to retire as a Marlin in '08, continues to make occasional appearances in Miami, and is now waiting for his son Griffin to make his debut as a member of, you guessed it, the Miami Marlins [and I'd like to thank Jonathan Villar for making that serendipity happen].
Posted by Jordan at 1:12 PM