Topps Cards That Should Have Been: The Jason Varitek Chronicles 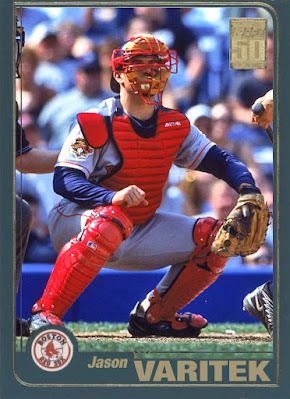 One of my goals with this project has been to right the various wrongs Topps has gone through with over the past 20 years, be it with omissions or contract issues or the like. One of the big ones that subsided right when I got into the hobby was that of Jason Varitek, the longtime Boston backstop.
From the beginning of his career until 2007, Jason Varitek did not have a contract with Topps, and therefore received absolutely zero Topps cards. The humanity.
And let's be fair- for the first few years of his career, Varitek was a replacement-level catcher who got by on decent seasons, and he doesn't start truly tearing up the league until 2003, so it wasn't a huge loss til around then. But still, Topps not making any cards of the catcher of the Boston Red Sox is a big deal, and one that I had no choice but to rectify.
So, starting in 2001, here they are. In 2001, Varitek mostly backs up Scott Hatteberg but hits .293 in 51 games. 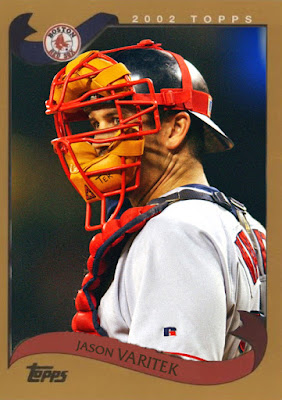 2002 is Varitek's first season with a WAR over 2, as the catching gig is all but his thanks to him playing 132 games behind the plate, hitting .266 and notching 61 RBIs. Not pristine, but he's beginning to benefit from being on the Sox with Ramirez, Damon and Ortiz all at once. 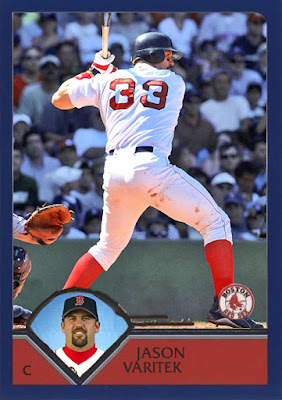 2003 is the breakout year. Tek hits .273 with 25 homers, a career high for him, 85 RBIs, another career high, and his first ASG appearance. He also gets MVP votes, postseason playing time, and a stranglehold on the position . Here is where Topps starts really regretting not signing Varitek to a contract. 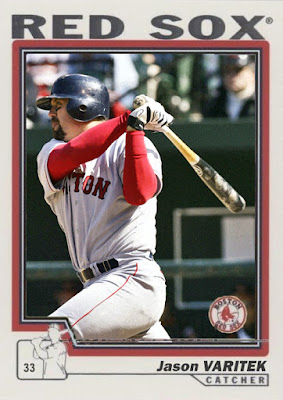 And they begin to regret it even more in 2004, another strong year for Varitek with a .296 average and 73 RBIs, one that would see him win his first of two World Series rings. Tek has 11 postseason RBIs for the Sox, and cements himself as a reliable, necessary presence in the Boston dugout.
So...Topps can't even make a card for the catcher of the World Series champions. Awkward. 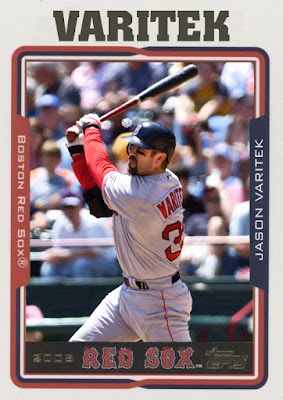 It gets worse. In 2005, Varitek has his most impressive season yet, getting a gold glove, a silver slugger, more MVP votes, a 70-RBI year AND... 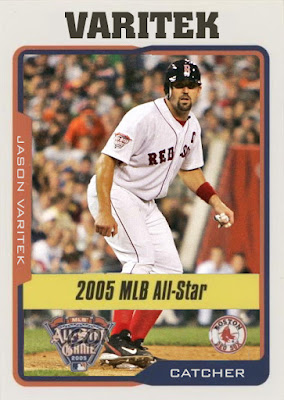 His second ASG appearance, marked by a card that would have shown up in 2005 Topps Update. This would have been a cool one, too, as it represents a great RBI moment from that ASG. 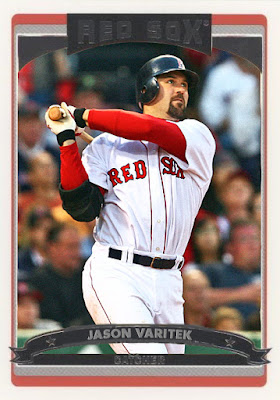 And in 2006, Varitek would wind things down with a .233 average in only 106 games thanks to an injury [Doug Mirabelli would be on hand to back up].
2007, he'd have a posed shot against the Sox's maroon background, and from then on Topps would be on top of things giving him flagship releases. Again, I wish they'd acted sooner, but there's a lot you can't control about Topps.
Posted by Jordan at 2:49 PM