Topps Cards That Should Have Been: The Xavier Nady Chronicles 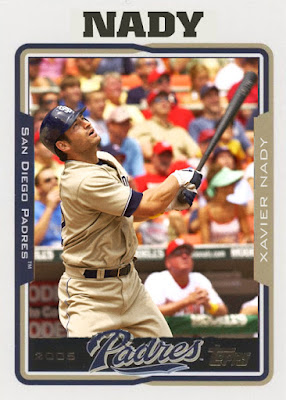 Xavier Nady is one of those unsung heroes of 2000s baseball. He never made an All-Star team, but he was a prominent member of some very cool playoff teams, like the 2005 Padres and the 2012 Giants, and he was one of the stars of the late-2000s almost-good Pirates teams.

Topps was, for the most part, on top of Nady's many moves, especially during the period from 2008 to 2011, where he spent time in New York and...got injured before he could join the postseason effort there. For some reason they didn't make a card of him in 2005, mostly because his 2004 season was kind of uneventful and they figured it wouldn't be very worthy of a card. The joke was on them, as Nady hit .261 in 124 games, and solidified himself as a lineup presence.

Stints with the Mets, Pirates, Yankees, Cubs, Diamondbacks and Nationals followed, and then Topps gave up. 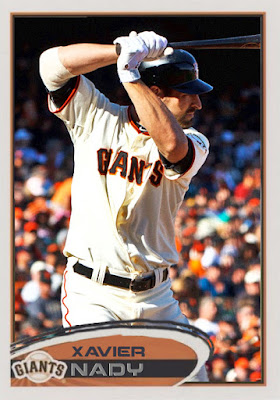 Unfortunately, that was the one point where Xavier Nady could have benefited from a Topps card. Nady gets released by the Nats in June then signed by the Giants in an effort to aid the outfield, then winds up in the middle of a Giants postseason run thanks to the Giants' hesitancy to play the HGH-friendly Melky Cabrera. In 19 games, Nady hits .240 with 7 RBIs, though he goes hitless in the playoffs. Still gets a ring, though.
Nady splits 2013 between the Royals and Rockies and makes the team with neither, so he signs a minor league deal with a familiar team. 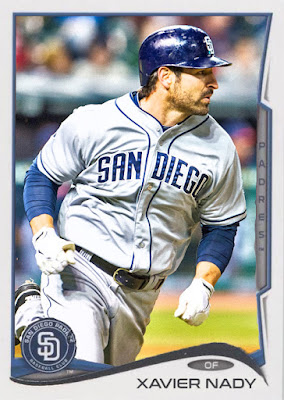 This is odd to me. Xavier Nady in 2014 Padres duds. Not as weird if it would be if he were wearing 2020 Padres pinstripes, but...weird.
Yes, it's true. Xavier Nady made the team in 2014 in San Diego, and got some starts alongside 2014-era Padres stars like Cameron Maybin, Yonder Alonso, Jedd Gyorko and Alexi Amarista. In 22 games, Nady hit a blistering .135, with 4 RBIs, 3 of them homers. His prime had clearly past, but it was kinda cool that he got to finish his career with the same team he started with. Yeah, he tried again after the Pads released him by signing with the Ms, but...he wasn't gonna top a full-circle ending.
So yeah, not a lot of people might remember Xavier Nady, but he was a fun little fringe player, and he still could have been more documented on Topps cards.