Topps Cards That Should Have Been: The Rod Beck Chronicles 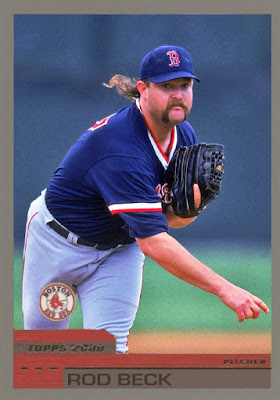 I think we've been wasting time comparing Craig Kimbrel to Trevor Hoffman when we really should be comparing him to Rod Beck.

I mean, swap out Huntsville for Van Nuys, and a slightly lower average saves-per-season, and Rod Beck's first decade of MLB service looks quite similar to Kimbrel's. Both big-game closers with insane consistency and intimidation that peters off spontaneously. And right now, we're in the 'early 2000s in Boston' portion of Kimbrel's career. A great market [Chicago], a golden opportunity, and nothing's coming together.

Rod Beck, though, had more drastic troubles, with less of a sharp cutoff. He was struggling in Chicago in 1999 before a trade to Boston gave him a crack at a ninth-inning gig, which he did much better with. In a full season for the Sox in 2000, he did much better, with a 3.10 ERA in 34 games. Only problem was he didn't have a chance at the closing gig- Derek Lowe, of all people, closed 41 games for the Sox that year, in Boston's attempt to fill the bullpen with starters [Wakefield also relieved that year] and fill the rotation with people like Pete Schourek and Ramon Martinez [note to self, he didn't have a 2000 Topps card with the Sox]. 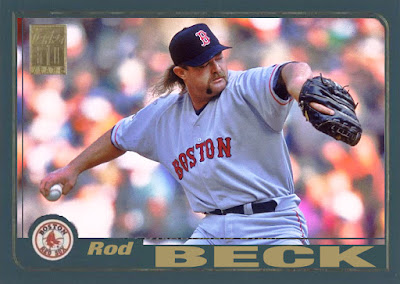 Beck wasn't the officially designated closer in 2001, and only notched 6 saves for the Sox, but he did have a fuller, more relied-upon season as a middle reliever, appeared in 68 games and had a 3.90 ERA with 63 Ks, which is a different season for the man who's usually responsible for 50 saves, but one that was more indicative of where relief pitching was going in the following seasons.

In 2002, the year Topps actually decides to make a card of him, those numbskulls, Rod Beck required Tommy John surgery, and sat out the entire year. The Sox moved on, getting Ugueth Urbina to pitch the ninth, with 40 saves as well. Beck would be a free agent for 2003, and it would take a lot to get someone to sign him, even for a minor league deal. 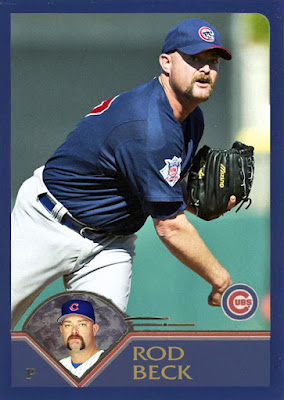 One of Beck's former teams decided to bite, though. The Chicago Cubs, with whom Beck notched a career high 51 saves in 1998, took a chance on Shooter, signing him to a minor league deal. The Cubs went into Spring Training with both Joe Borowski and Antonio Alfonseca looking at the closing gig, so a rehabilitated Beck would be facing sharp competition. Despite some decent showings in March, Beck doesn't make the team, spends two months in Iowa living in a motor home and becoming friends with all the fans, and he's released in May. Topps doesn't make a card of this Cubs tenure, but if they had a mind, they would have made one for Series 1.

So Beck is a free agent once again...but only for a few days, as another California team, much like the Giants whom he came up with, needed help in the ninth. 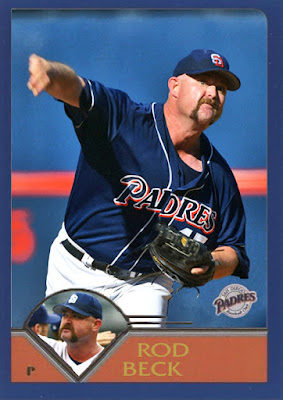 The San Diego Padres signed Rod Beck with the sole intention of giving him the ninth inning and letting him close again. They had no one willing to hold the job for more than 4 saves, Trevor Hoffman was out for the season, and Beck was a tested solution. In 36 games, Beck held a 1.78 ERA with 32 strikeouts and 20 saves. For a last place team, Beck was a steady constant with more than enough in the tank to keep them from completely falling apart. These were the last great numbers of Beck's career, and proof that he could still perform post-Tommy-John. 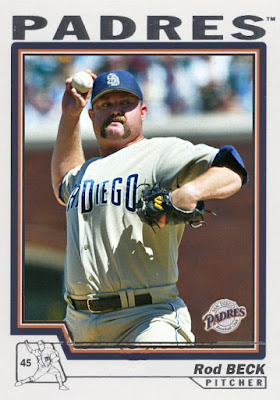 The Padres re-signed Beck for the 2004 season, but things would be different. Trevor Hoffman would be healthy, and would deliver 41 saves. The bullpen itself was sturdier, with great performances from Scott Linebrink, Akinori Otsuka and Antonio Osuna. Rod Beck had much less of a place in this much better team, and in 26 games his ERA ballooned to 6.38, with more NL East offenses getting to him than ever before. It was a disappointing, heartbreaking finale to Beck's career, made even more heartbreaking by Beck's passing three years later.

The other stark difference between Rod Beck and Craig Kimbrel is that Topps has always been behind Kimbrel, no matter where he went and no matter how dire his ERA looked. It is a mindset that Topps had never previously adopted with relievers, even leaving late-career moves from Rich Gossage, John Franco and Jesse Orosco out of their sets entirely. I'm not sure if Kimbrel's going to bounce back, but because he'll be doing so in 2021, rather than 2003, maybe the card companies will be more there for him than they were for Beck back in the day.