Topps Cards That Should Have Been: The Brandon Phillips Chronicles 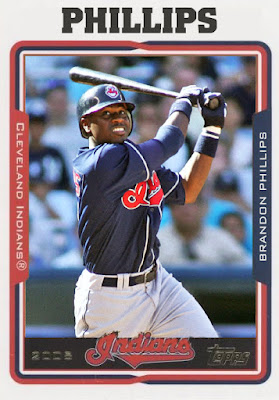 Which makes it very odd when discussing the areas outside of this Reds tenure, because it's some odd stuff.

It's well-known that Brandon Phillips comes to Cleveland in 2002 as part of the Bartolo Colon trade, but he arrives in Cleveland at a point where Cleveland really doesn't know what to do with him. He has a full season in 2003, but it's not a season very high above replacement level, and the Indians go with Ronnie Belliard for the following two seasons.

But then, of course, the Reds take a chance on him for a starting gig, he helps them back to the playoffs and becomes a mainstay, then rides out the end of his contract and gets traded to Atlanta in 2017, which Topps does document.

It's the rest that Topps is sketchy on. 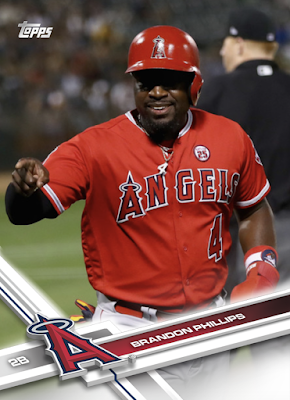 Okay, so...waiver deadline 2017, which Topps wasn't gonna do for Update anyway seeing as they couldn't even do the regular trade deadline, the Angels trade for Phillips, who'd been hitting .291 for the Braves. Phillips plays 24 games in Anaheim and hits .255 with 8 RBIs.

It's a season that's overall pretty good, and should have gotten teams biting for the 2018 season. That sadly doesn't happen. The offseason goes by, Phillips' name remains on the table, and he packs it in. But in June, a team does come calling...the Boston Red Sox. 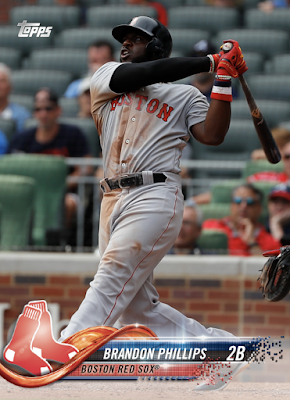 I want to make it clear that Brandon Phillips spent most of the 2018 season in Pawtucket, and hit .302 with 19 RBIs with the PawSox. That alone is enough, really- he proved he had stuff in the tank, and that he could retire with dignity. There was never gonna be room in the majors for him at 2nd, between Dustin Pedroia, Eduardo Nunez and Ian Kinsler holding onto the position. Phillips would play 9 games in the majors, hitting .130 with 2 RBIs, including a home run, but there was never gonna be a place for him in the 2018 World Series team. It's just nice that he finished at 38 rather than 28.

I don't know if Phillips will get any HOF votes in a few years, but he's still a fun player to collect, and the Reds fans must have enjoyed a decade of his work.