Topps Cards That Should Have Been: The Hideki Matsui Chronicles 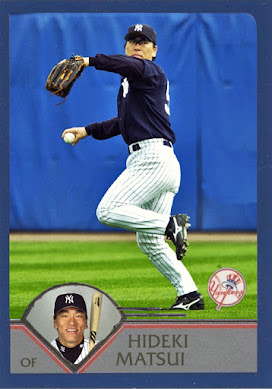 If I were collecting in 2003, I'd be miffed.
Hideki Matsui, one of the most fearsome sluggers in Japanese league history, signs with my team, the New York Yankees, and Topps doesn't sign him to a deal. Upper Deck, Donruss and Fleer all do. But Topps, the most important card retailer in the business, can't court Matsui to a deal. So in 2003, while Upper Deck, Donruss and Fleer are producing tons of rookie cards of the slugger, Topps is just...shrugging. Going 'how about Jose Contreras?'
It always pisses me off when Topps can't sign someone to a card-producing deal, because I'm a Topps-reliant collector, and I like seeing everybody in a Topps set and using that as my base for that player's year. And if they're not gonna do cards of, oh I dunno, THE MOST IMPORTANT JAPANESE EXPORT OF 2003, then what's the point?
So yes. Hideki Matsui makes it to New York in '03, and immediately hits the ground running, hitting .287 with 106 RBIs and 179 hits. He makes an all-star team, plays all 162 games, plays in a World Series, and loses Rookie of the Year to Angel Berroa for some strange reason.If Topps were to have put a Matsui rookie card in flagship, it would have looked like that- a shot of Matsui fielding specifically for card companies to have an action shot. That would have been enough for us. 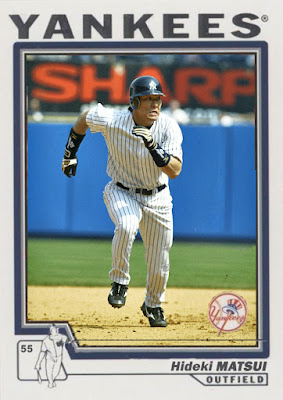 2004 is another strong year for the hitter affectionately referred to as Godzilla- he hits a career-high 31 homers, hits .298 with 108 RBIs, makes ANOTHER All-Star team, and finishes the season with a 5.0 WAR, higher than all Yankees that aren't A-Rod. Topps once again isn't making cards of Matsui this year, which is sucky, but UD, Donruss and Fleer all still do.
In 2005, Matsui FINALLY signs a contract with Topps, and from '05 until 2010, Matsui has tons of Topps cards, remains a solid MLB hitter and wins a World Series.
Then, in 2011...the contract runs out. And Matsui and Topps don't agree on a new deal. Which means, for the last two years of Matsui's career...NO ONE is making cards of him. 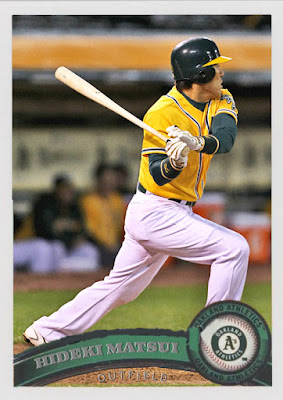 While Matsui's final two seasons aren't to the caliber of his Yankee years...we could have at least had SOMETHING. Anything. Like...2011, Matsui plays 141 games with the Oakland Athletics, in a starting role. He hits .251 with 72 RBIs and 130 hits. Not great, but he's still one of the chief figures of the A's season, and a Topps card of him would have made sense. Of course, no contract, no cards. So we suffer. 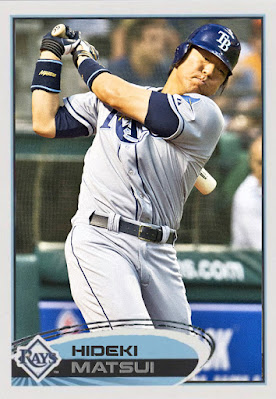 In 2012, Matsui doesn't sign with a team until one desperately needs him, and in late April he signs with the Rays. In 34 games, he hits .147 with only 7 RBIs. Clearly, his best days are behind him, and he retires after the season. And, again, Topps could have made a cool final tribute of Matsui, but it doesn't happen.
In 2017, Topps signs a contract to produce cards of Matsui as a legend. He also signs with Panini, because nyah. Matsui has been on cards ever since. And yet Topps will probably never rewrite the years they missed with Matsui, because....I dunno, money or something.
Posted by Jordan at 3:17 PM