Topps Cards That Should Have Been: The Bronson Arroyo Chronicles 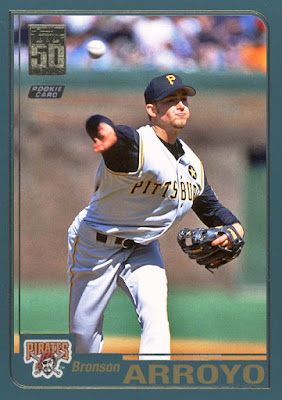 Unless my calculations are incorrect, Bronson Arroyo might be the only active MLB player in history to ever appear on a VH1 'I Love the' series. Not only did he appear in 'I Love the 80s 3D', but he also appeared in 'I Love the 70s Volume 2', which I believe was taping around the same time.
Think about that. The fun-loving, guitar-playing member of the 2004 Red Sox was cool enough to be one of the many talking heads on VH1 along with Hal Sparks, Michael Ian Black, Loni Love, Patrice O'Neal and Mo Rocca. Talking about...I dunno, 'My Bodyguard', or 'St. Elsewhere' or something, I don't remember.
I'll add in here that he's not the sole MLB personnel to be featured on an I Love the series. Heidi Hamels was in one of the 90s ones. Yes, pre-Cole, but post-Survivor. So I'll allow it.
This anecdote serves the purpose to inform you all that despite being a steady arm in Cincinnati for a good decade or so, Bronson Arroyo's best moments came as a baseball personality rather than a baseball player. He was a character, a regular 2000s guitar bro kind of guy that happened to post a mean fastball. And I think the baseball world latched onto that in the late 2000s, as he became a standout for the Reds, and his high leg kick became something to watch for.
But what most people forget, especially Topps, is that he had a career as a relief specialist before his big break with the Sox and Reds. He was stuck in the Pittsburgh bullpen waiting behind Jason Schmidt, Kris Benson and Todd Ritchie. By 2001 he was, in fact, getting some starts, but he still finished with a 5.09 ERA in 24 games. Mediocre even for 2000s Pittsburgh. 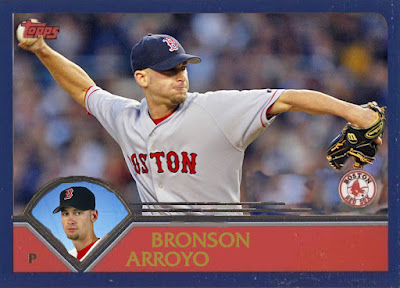 By 2003, Arroyo has been waived by the Red Sox, and is finally playing for a good team. He's not given much of a chance this season in Boston, though, only playing 6 games in relief. He does post a 2.08 ERA with 14 Ks, though. Additionally, he strikes out 5 Yankees in the ALCS, providing some much-needed relief help on the road to a heartbreak thanks to Aaron Boone. So they're getting the idea that Arroyo can be an asset, they just don't know what to do with him yet. 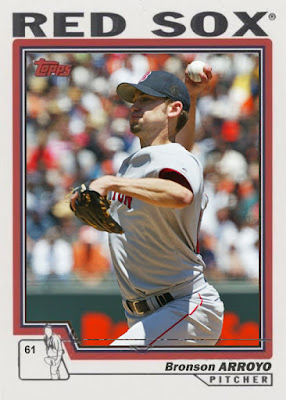 By 2004, their championship year, the Red Sox FINALLY figure Arroyo out. In a rotation featuring Curt Schilling, Pedro Martinez, Derek Lowe and Tim Wakefield, already four insanely tough pitchers if they're all on at once [and all but Lowe were], Epstein and Francona decided that Arroyo should be given that fifth rotation spot. And oh boy did he deliver, with a 10-9 record in 29 starts, a 4.03 ERA and 142 strikeouts, his best year to date.
In the 2004 postseason, Bronson Arroyo would strike out 14, and even if he'd allow more earned runs than hoped for, he still was a crucial part of the championship Sox team, and they rewarded him with another strong year in 2005, and eventually a trade to a market where he could be an ace.
Topps somehow didn't do a base card of Bronson Arroyo until 2005, but they'd be good for the rest of his run. I've rectified this, which must help.
Posted by Jordan at 3:55 PM