Topps Cards That Should Have Been: Late-Career Matt Lawton 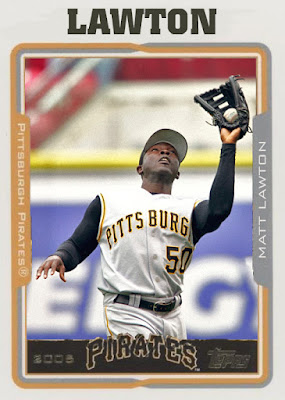 Matt Lawton is one of those forgotten heroes of late-90s, early-00s baseball. He was a solid contact-hitting outfielder overshadowed by Torii Hunter in Minnesota, had a few 2-3 WAR years there, then bopped around and had an ASG season in Cleveland in 2004. It was a decent trajectory that Lawton wasn't especially able to sustain past 2004.

Topps depicted Lawton as a Cleveland Indian for 2005 Topps, but Lawton had already signed a deal with the Pittsburgh Pirates. Lawton would share the outfield with Jason Bay and Tike Redman, and add some much-needed veteran presence to the struggling mid-2000s Bucs. And it...sort of worked. Lawton hit .273 in 101 games with the Pirates, being one of the strengths of the first half of the season, and being one of two players with over 10 stolen bases [the other being Jason Bay].

However, it makes him enough of a commodity for teams to want him at the trade deadline. The Chicago Cubs bite on the last day of the trade deadline, trading Jody Gerut for him. So, now Topps can't make a Pirates card of him in Update. 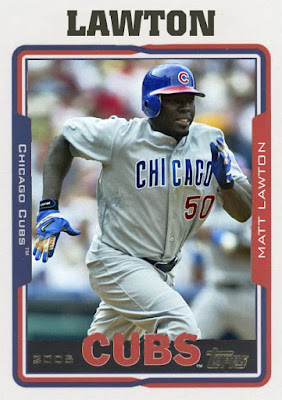 Lawton joins the Cubs as they have a 53-52 record, and are looking at competing with the Astros and Cardinals for the division. Lawton does what he can in 19 games, hits .244 with 19 hits, and keeps his seasonal momentum going. But by the end of August, the Cubs are under .500, and are no longer a feasible playoff option. Therefore they no longer have a use for Lawton, and trade him to the still-competitive Yankees.

Which means Topps can't make a Cubs Lawton card either. They do end up doing a Yankee Lawton card, which is ironic because that's where he did the worst that year. 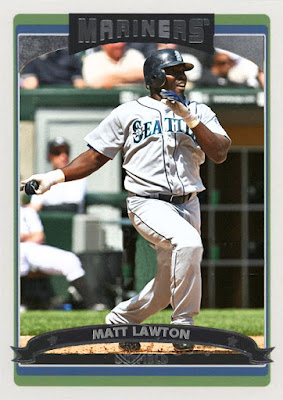 As he's lowering out of his prime, Matt Lawton can only muster a minor league deal with the Mariners for 2006. He hits .259 in 11 games, with 7 hits, but with Ichiro, Ibanez and and Willie Bloomquist hammering down outfield spots, there really was no place for slumping Matt Lawton, sadly. He retires after the season, and Topps doesn't seem to notice.

I don't think Matt Lawton is an important player in MLB history, but he is one of those 'you can't talk about 2000s Eastern conference baseball without him' kind of guys. He's a two time All star, a Twins hero, and he's definitely an important figure of the 2005 season. I just wish Topps thought so.