Topps Cards That Should Have Been: The Pat Neshek Chronicles 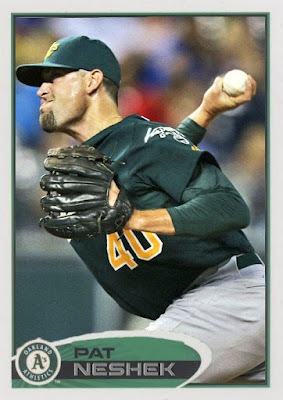 That's something in itself. While being one of the few MLB players to actively collect baseball cards, Pat Neshek became one of the most people TO collect on baseball cards. Just look at the Lowell Palmer homage card in 2019 Heritage. Look at the number of fun cards Topps gave him from 2017 to 2019. Look at all the stars who apparently signed autos for Pat during ASG games. Neshek was the real deal, and it was a joy to have him in Philly for his last 3 seasons.

Topps generally was good at producing cards of Neshek, honestly, but they missed on two occasions. One was in 2012, coming off an okay year in San Diego. The A's signed him to a two-year deal, but a pretty low-key one. As Topps wasn't exactly rushing to make A's cards in 2012, Neshek's 24 games and 1.37 ERA went unaccounted for in update, which is a shame. This was the season where Neshek flirted with a soul patch before eventually going for the full beard in subsequent seasons. 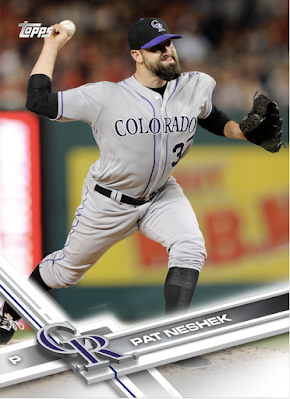 By that point, Neshek was already in Colorado. Yes, Pat Neshek was one of the many traded players absolutely screwed over by Topps' early print date for Update. Hooray.

Neshek's time in Colorado after his strong, ASG-caliber start to the season with Philly was also pretty good. Yeah, slightly raised ERA because Denver, but a 2.45 ERA and 24 Ks in 28 games isn't bad at all. And it was a strong finish that'd lead Philly to re-sign him for 2 more years, with...eventual diminishing returns in 2019.

Still, Neshek was a fun reliever to collect, and I'm thankful that Topps, for the most part, had his cards sorted out.