Topps Cards That Should Have Been: The Rajai Davis Chronicles 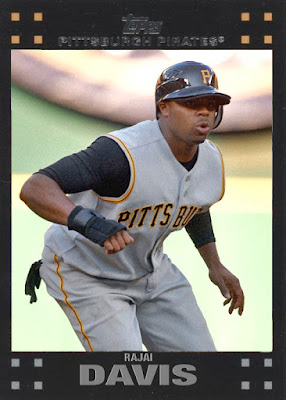 Something about relievers and people who steal a ton of bases that always falls into the category of 'people Topps isn't exactly racing to make cards of'. I dunno, some things you can't help.
Rajai Davis has a rookie with Topps in the 2003 Traded set. It's one of those 'XRC' type 'catch 'em before they start playing' things that the MLBPA told them to stop doing in 2006. And then, in 2006 and 2007, when Topps could have made a 'RC' issue for Davis, they didn't. They, uh...didn't want to. Stuff in 07 '52 or Bowman Heritage, whatever, but nothing in flagship.
So. In 2007, Davis was coming off a mild rookie season in Pittsburgh where he only played 20 games. So in 2007, with the Pirates, he gets more playing time, and in 24 games he hits .271, with 5 stolen bases and 13 hits, which is a solid audition for an outfield that already has Nate McLouth, Jason Bay and Xavier Nady pretty locked up.
Then, at the trade deadline, tragedy strikes- the Pirates, who have Paul Maholm, Ian Snell, Tom Gorzellany and Zach Duke all pitching relatively well...decide they need starting pitching help. So who do they decide that they need to fill the void? That's right, 2007-era Matt Morris. Matt Morris, his 7-7 record, his 4.35 ERA, and his promise of a return to his Cardinals numbers that will eternally go unfulfilled. So they trade Rajai Davis, who could potentially win an OF spot, to the Giants for Matt Morris. Morris proceeds to have a 6.10 ERA in 11 starts. Hooray. 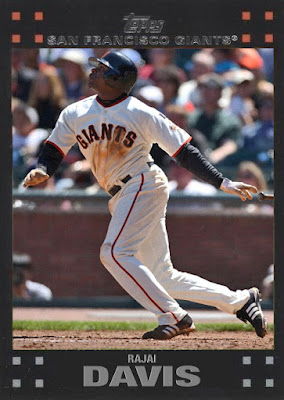 Davis, however, blossoms in San Francisco. In 51 games, he hits .282 with 17 steals and 40 hits, gains a mentor figure in the form of Barry Bonds, plays more often, and makes a run at Bonds' OF position in 2008. It's a fantastic rookie effort, and one that does indicate a long career for Rajai Davis.
Unfortunately, the baseball gods had other ideas. After hitting .056 in the first 12 games of the 2008 season, even with 4 steals, the Giants gave up on Davis, and waived him. Not only did it put a stop to what would have been a fruitful career for Davis in SF, it also ruins Topps' effort to FINALLY produce a base card of Davis in flagship with the Giants.
Because of this, they never actually produce a 2008 Topps card of the team that claimed him. [Something something Yamid Haad]. 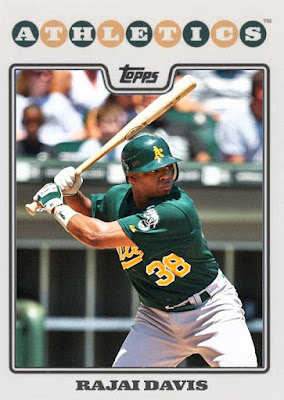 Which looks pretty mismanaged considering that Rajai Davis was the A's starting centerfielder in 2008.
All the accolades are obvious. He hits pretty well for average with .260, leads the team in stolen bases with 25, gets 50 hits and is phased out once Carlos Gonzalez gets more starts.
The rest is not only history, but well-documented by Topps- Gonzalez is traded to Colorado for Matt Holliday, centerfield is Davis', and he becomes a base-stealing mainstay for Oakland, Toronto, Detroit and Cleveland.
In 2017, after a huge season for him in Cleveland, he returns to Oakland for a victory lap essentially and steals 26 bases despite hitting less for average. But the A's don't go anywhere in 2017, and in August, he's waived yet again, landing in a competitor's market... 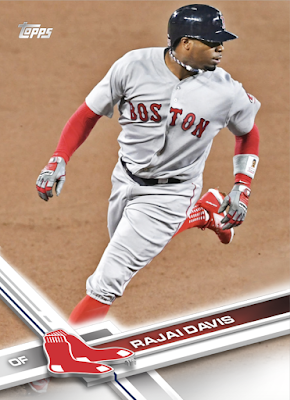 Yeah, bet a lot of you don't remember that Rajai Davis played for Boston, eh?
In a season where the Sox' outfield was clearly Betts-Bradley-Benintendi, Davis was brought in as a bench player, base-stealer and defensive sub. In 17 games he hit .250 with 3 steals. He was used as a defensive sub in the playoffs and didn't see any time at the plate...perhaps one of the reasons why they couldn't get past the Astros that year.
In 2018 he returns to Cleveland, does okay. In 2019, he has one last year in Queens, which I'd definitely make if A.) 2019 Topps was easy to customize and B.) Topps managed to add that to the custom card maker. Someday I'll figure it out.
Posted by Jordan at 4:17 PM