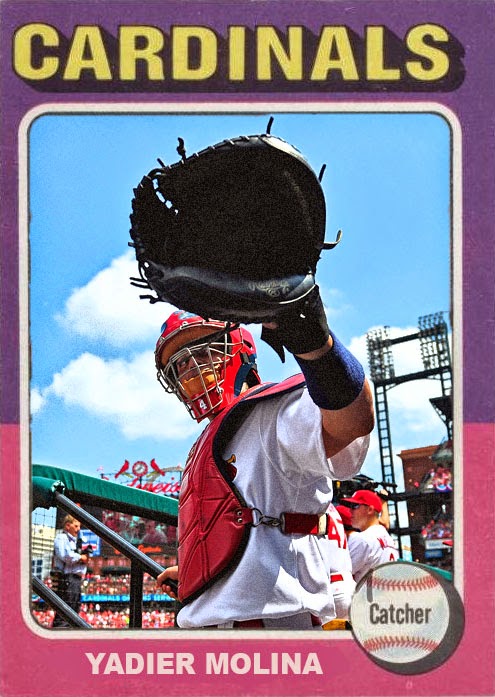 I am just full of great shots this season. This is another killer one.

I still think Yadier Molina is the best catcher in the NL. Buster Posey and Jonathan Lucroy come very, very close, but even after his injury-laden season last year, I still think Molina comes out on top. The guy was a wonderful catcher when I started collecting in 2007, and he hasn't once stopped performing to the best of his ability.

He's so good that even as a noted hater of the Cardinals, I don't hate him. I save most of my hatred for Matt Carpenter these days. Molina actually warrants a lot of respect, because he's definitely getting up there, and he's still catching most of the week, and doing pretty damn well at it, too.

I have no idea what the Cardinals are going to do this seas-oh, yeah, I do. They're gonna have a quiet summer, and then get really good towards the end, make it to the playoffs and narrowly miss the World Series. That's what they do every damn year. Even if they have a slightly depleted squad this year, they're probably still gonna make the playoffs, though the Cubs and Pirates are gonna make it close.

Coming Tomorrow- A sweet throwback of a newly relocated slugger.
Posted by Jordan at 8:14 PM