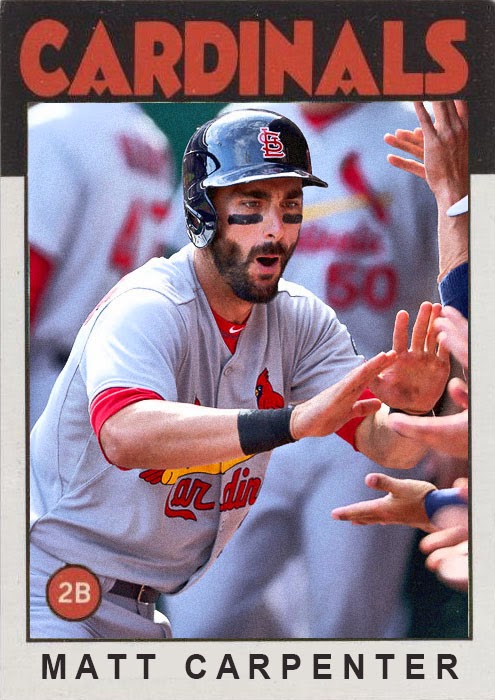 I think that ever since Pujols left, they've been trying to find someone who could capture the same amount of star-power for that amount of time in St. Louis. Like, they tried it with Beltran, and it worked for like, a year or two, and then he left and joined the Yankees. And they've been trying it with Holliday, but I don't see him as a household name, like he was with the Rockies. And Wainwright can't stay healthy.

Matt Carpenter is looking like he's gonna be that big star on this roster, and it's about time. Not only has he been consistently good for the past few seasons, but he's gotten off to a GREAT start in 2015, giving a nice supply of hits and average to boost a somehow-still-strong Cardinals lineup. And I'm really happy for him, because he's a nice young player, and he's building his way up without hitting a ton of home runs, and without completely dominating one part of the stats.

Plus, he's getting relatively close to that 'star power' zone in St. Louis, especially now that Wainwright's out for the season. They need somebody big to root for, and Carpenter looks like that team-captain-sort of player, the guy you trust.

I just wish he wasn't on the Cardinals, but you can't win 'em all.

Coming Tonight: Hideo Nomo comes up a lot as one of the greatest Japanese players we've ever had over here. Hideki Matsui comes up a bit too. I think we may have a serious rival to their cases in the Bronx right now.
Posted by Jordan at 10:06 AM
Labels: Cardinals, Custom Cards, Matt Carpenter