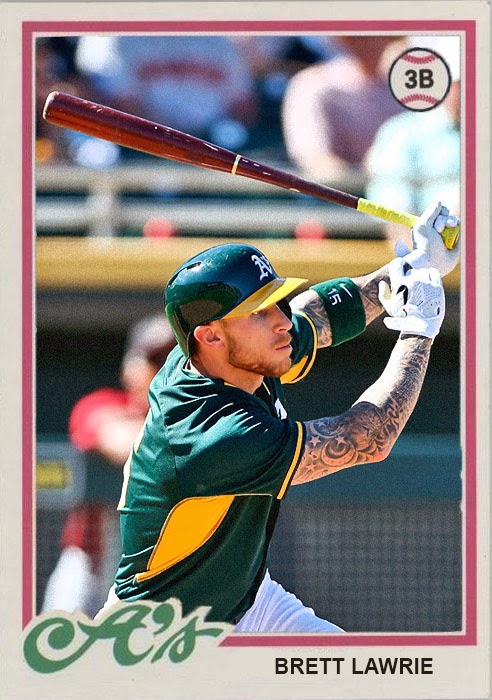 The Athletics didn't...necessarily...NEED to swap their third baseman over to Toronto. Going into the offseason, i don't think that was a priority. It's not like they went in and said 'you know that third baseman we have that's one of the best players on the team? Let's trade him and get another third baseman." Like, that rarely works.

...And I guess it went alright when the Blue Jays swapped Troy Glaus for Scott Rolen.

Okay, maybe it's a bit more common than I prefaced this post with. Bottom line- I didn't see the deal coming. I thought it would have been wiser for the A's to hold onto Donaldson, as he's, you know, THE BEST PLAYER ON THE TEAM. But, they sent him to Toronto for Brett Lawrie, which isn't as bad as, say, trading for Dioner Navarro or Josh Thole or something shitty like that.

Sorry, tangent. Where was I?

Matter of fact, in the last few games, Lawrie has had some nice hits and has proved that he can definitely stick around, and hit for power. Lawrie, outside of his rookie season, didn't do a whole hell of a lot for the Jays. He was a good third baseman, and he hit, but he was overshadowed by Jose Bautista and Edwin Encarnacion and all of the other massive hitters on the team.

Now that he's in Oakland, there's a wider range. The hitters on this squad are either injured (see Crisp, Coco) or dormant (see Reddick, Josh). Lawrie can roll out some nice numbers and make a name for himself, which is kind of perfect. On the flip side, Josh Donaldson might not have a great year, as his roster is still pretty crowded.

I'm expecting Brett Lawrie to have a nice year, even if the A's don't.

Coming Tomorrow- The unofficial leader of a surprisingly-durable Orioles squad.
Posted by Jordan at 10:47 PM