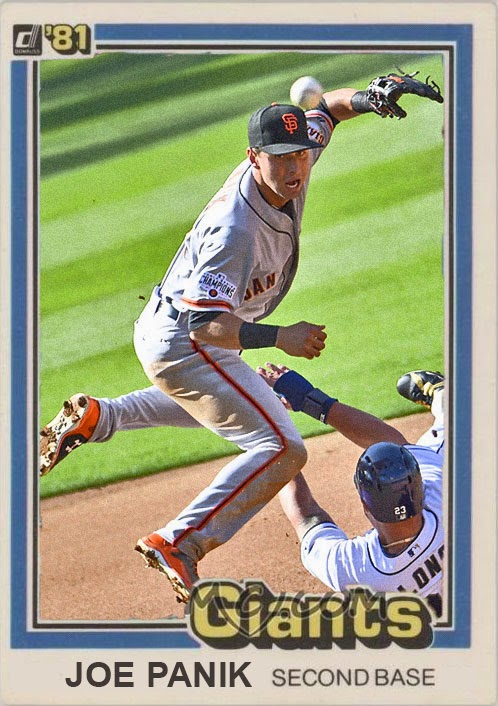 (See what you can do with atmosphere if you just tilt the shot sideways a tad?)

Marco Scutaro came to the Giants a journeyman, a backup, a utility guy with no real purpose or settlement. He ended up staying for a two and a half seasons, being relied upon as a veteran and as an expert. Unfortunately, by the time 2014 rolled around, he'd had injuries and wasn't as reliable as he was when he joined the team. So, sadly, Scutaro was released before the season.

And he was released because the Giants did not panic, and got a backup. An appropriately named backup, named Joe Panik.

In his rookie season, Panik made a case for a permanent starter-ship in San Francisco, by having a great defensive season, getting in a lot of hits, and getting himself a lot of fans. By the end of the season, the fans didn't especially miss Scutaro, and they really enjoyed what Panik was giving to the game.

Panik does have a lot of pressure to succeed, especially considering that history has proven the Giants don't do especially well in odd-numbered years. I imagine he's gonna stay relevant, if he stays healthy. Him, Crawford and Belt are a great combo, and McGehee is warming up, I think.

Coming Tonight (?)- You know, a funny thing happens when all of the huge bats on your team leave or get injured...the responsibility falls on you. So, you can just move to third base to take less time on defense, and start mashing the hell out of the ball.
Posted by Jordan at 11:51 AM