One Does Not Simply Make a Kris Bryant Rookie Card... 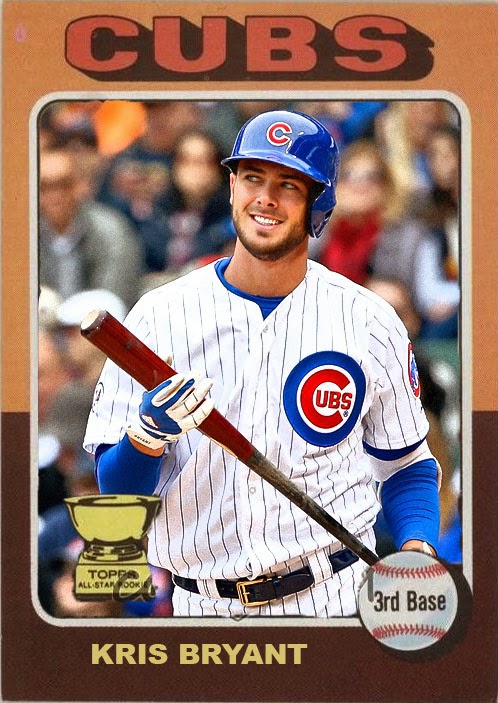 There. I made a Kris Bryant custom. That's gotta please somebody, right?

I might as well take this opportunity to address something serious, because thanks to college I haven't had a shit ton of time to actually address card industry issues.

So I'm going to. And it involves Kris Bryant.

In 2010, when Stephen Strasburg made his debut, Topps engineered a wild goose chase of trying to get his rookie card, culminating in "breaking their own transmogrifyer" (tm dayf), and adding a 661st cart to the base set (you know, before they had to leave #7 empty).

In 2012, when Bryce Harper made his debut, Topps made just as big a deal about him, ultra SPing all of his rookie cards, and giving the same #661 treatment they gave to Strasburg. And then promptly made SP'd rookie cards of Harper in LITERALLY EVERY OTHER PRODUCT THEY RELEASED THAT YEAR. EVEN ARCHIVES.

So, three years later, on the heels of the debut of ANOTHER rookie superstar, Topps prepared a full game plan that they were preparing for the day that Kris Bryant debuted, which was last friday, detailing everything they were gonna do, including adding Bryant to Series 2, gimmicking him into Bowman, and a bunch of other things that I clearly do not remember right now. They didn't say whether Bryant's series 2 release would be the tacked on #662, like Strasburg and Harper, but knowing Topps, it'll probably end up like that.

I just want to point out the BIG ROOKIE SUPERSTAR prior to Strasburg didn't get up-played as much as the next three did. His name, for any of you who remember, was Daisuke Matsuzaka. And he got a card in the 2007 base set, and that was it. In fact, there was still a card #661 in 2007 Topps, but that's because Topps couldn't simply just make an ordinary card of the guy that was about to break Hank Aaron's record.

Now, the BIG ROOKIE SUPERSTAR before that? Yeah, his rookie was gimmicked so hard that people couldn't complete the 2006 base set. (For anyone who doesn't know, that was Alex Gordon, and his rookie card was SSP'd for Series 2, infuriating literally every collector in the biz). But other than that, there aren't a ton of short-printing of HUGE rookies before that. Upper Deck or Donruss would do the thing in their premium sets where they'd short-print the rookies, but that's not the same thing- Topps would put ONE rookie on such a pedestal that it'd be impossible to find their cards.

I want to think that Topps has learned something. Thanks to the emergence of Panini, Topps has gone back to putting out quality sets, like Stadium Club, High Tek, and 2015 Topps, and Heritage. Hell, even Gypsy Queen looks pretty nice this year. So I really don't want them to immediately snap back to their old tricks with this Kris Bryant thing. He's a big rookie, yeah we know, but we want to FIND his cards, so we can hang onto them in the event that he gets good. That's how our folks did it in the past. THIS is just making it harder for everyone, and leaving the company with most of the big rookie cards, which is not how this is supposed to work.

I hope we eventually get some more details on what they're doing with Bryant in Series 2, because I'd actually like a copy of his card, without having to try too hard.

(By the way, I wanna get back to more 'issue' posts like this one. If I can, I'm gonna try to get 1 issue post and 1 'custom' post per day, possibly more than one custom, because I just made a TON last night. Hopefully you're gonna see a lot of content on the blog this month.)
Posted by Jordan at 3:33 PM

Labels: allow me to explain why this pisses me off, Cubs, Custom Cards, editorial, gimmicks, Kris Bryant, Ranting, Topps