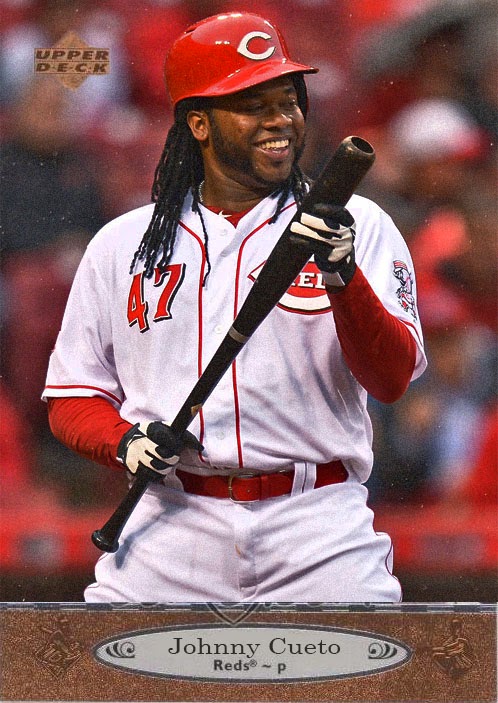 (Most Likely to be Found in a Dime Box)

The Reds are kind of in a stuck situation this year. Their division is stacked with three really, really good teams (and also the Brewers), and they're sort of stuck on the bottom, collecting dust. This is one of those years where the Reds are kind of in the middle in a strong division, and this may not be one of those years where being in the middle will get them anywhere.

Good news is they still have Johnny Cueto, and he's still really good. Ever since he came to the team in 2008, he's had a few really nice seasons, racking up a nice amount of wins and strikeouts, and solidifying himself as one of the more important pieces on a roster that is beginning to form some clout. Him, Votto, Bruce and Phillips are some of the stepping stones on the team, the guys who have been here since the late 2000's, and have been holding the team together since then. Todd Frazier hasn't been there as long, but he's becoming just as useful.

Also, this is probably one of my favorite customs of the year so far. It feels like a card from the 90's in almost every way.

Coming Tomorrow- Meanwhile, in the west, a guy who has slowly stayed awesome ever since landing in LA FINALLY makes some headlines.
Posted by Jordan at 10:29 PM