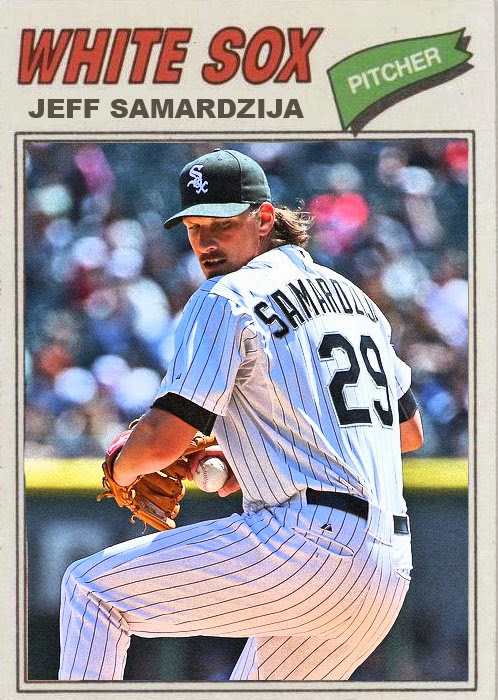 Yeah, be thankful it's not one of those 70's uniforms. To be honest, I'm really thankful they decided to go back to the black pinstripe ones they used to do.

I honestly never thought of Jeff Samardzija becoming a legitimate star until, well, he became one. He broke sort-of-big in 2013, when Matt Garza was on the downslope, and the Cubs didn't have a whole hell of a lot of pitching. So, he emerged from the bullpen and pitched some really nice games.

And then last year, he proceeded to nail down great teams with strikeouts, not wins, and make himself a name as a tough, tough pitcher. He got so big last year that the A's traded for him, and he was able to pitch (one game) into the postseason.

That's the thing about Samardzija. He can be legitimate, and he can be really good, but the odds need to be in his favor. This season he's on a good team, not great but good, but there's enough run support that he can get some much needed wins. Plus, the division can be tough, but I can see him striking out the Tigers a few times. It's not hard. V-Mart's especially easy to strike out.

I just think he'll have a really nice season, and the Sale-Samardzija combo is gonna kill AL Central batters.

Coming Tonight- Another guy who broke big in 2013, now the catcher for the defending AL champs.
Posted by Jordan at 9:54 AM