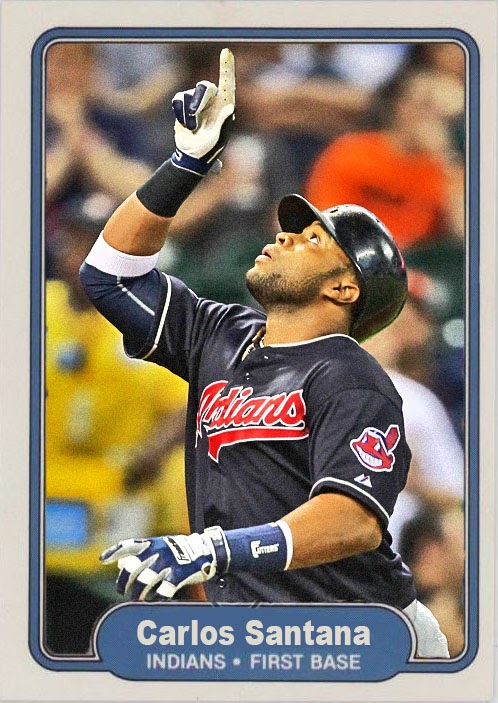 First of all, I know that's not necessarily the right position. I know he plays third, but for the sake of this custom, he's a first baseman.

i've always had a lot of respect for the Indians, even though the last few years the team's been a little inconsistent. I feel like adding players like Nick Swisher and Michael Bourn wasn't the greatest idea, because their homegrown (or...home-traded) players have really become great. I know that Brantley and Santana were netted in trades, but they're still significant pieces.

Carlos Santana has become one of the more powerful hitters on the team, right after switching from catcher to first baseman. I think the move may have helped him, because it paved the way for someone like Yan Gomes to fill (and get injured), so that Santana could spend more time hitting. This is why Victor Martinez, the last really good catcher to play for the Indians, is a DH now- he wanted to hone his batting skills rather than his defense.

I don't know if the Indians are going to be too great this year, because the Royals and Tigers look like they're gonna dominate. But I think Santana will at least get some good hits in.

Coming Tomorrow- When you're shortstop leaves for LA, and your first baseman...stops being awesome...it's nice to know your second baseman is still one of the best in baseball.
Posted by Jordan at 11:39 PM