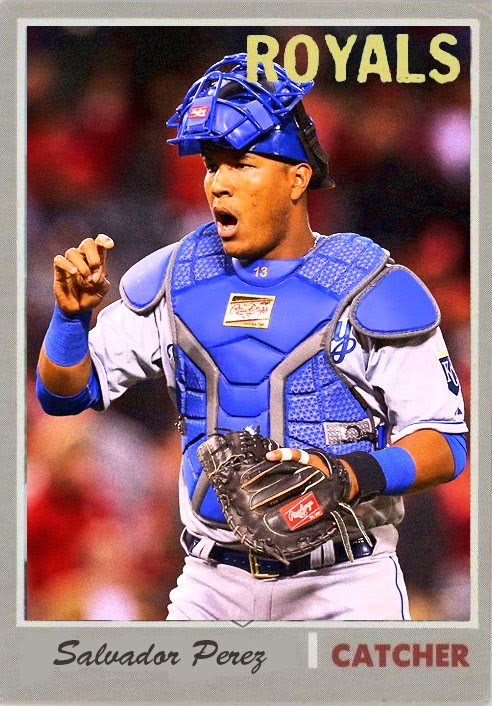 You see, there's a picture that deserves a caption. Is he rescuing an insect? Is he trying to eat an insect? Discuss.

I don't know how it happened, but Salvador Perez very quickly became one of the best catchers in the AL. I dunno what is was. One year he was in a few upper-end sets, and I was like, 'yeah, I guess he's okay', and pretty soon he's an All Star, and everybody's talking about him. And he was in the World Series last year, smacking the living daylights out of Tim Hudson and such.

I mean, I think maybe he gained a huge bat over time, or maybe it was the kind of thing where everybody else got good, and he got good by osmosis. But, I don't wanna go into too much detail. Bottom line is he's awesome now, he rocks, and I respect that.

This season, I don't know if the Royals are gonna be as big as they were in 2014. Before their series with the Yankees, the Tigers showed some serious potential, and have some of the best bats in the AL. If they rebound big time, they could be dangerous come September. It's between them and the Royals, I think, unless the White Sox want to get in on it.

Either way, Salvador Perez is gonna hit big and get another AS nod.

Coming Tomorrow- For a week, the Braves were one of the biggest teams in baseball. Then they returned to reality. Also returning to reality- their closer.
Posted by Jordan at 11:05 PM
Labels: Custom Cards, Royals, Salvador Perez