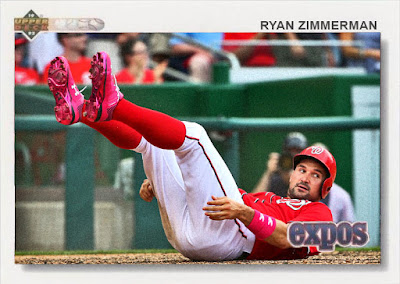 (At least that's what I think they call him.)

I feel bad for the Nats, because they had a few of their main sources of momentum pulled out from under them. Today, Stephen Strasburg was thrown on the DL, and Bryce Harper was scratched.

Man, if only they had someone who was popular from before those two joined the team...OH WAIT. RYAN ZIMMERMAN'S STILL THERE!

And to be fair, so far he's doing pretty well this season, hitting homers and RBIs like it's 2009 again. And I'm really happy for him. Last year I was worried we'd seen the last of his bigger numbers, as he spent a lot of the season on the DL/in limbo.

To be fair, I don't think Harper is going to be gone long, but Jayson Werth is looking like he's going to be gone for a while, and Anthony Rendon is still not back (I think). So Zim is one of the few offensive threats they have left. And that's not bad, considering how well he's been doing so far.

So yeah, the Nats are in first, and I don't see why they'd be slipping out of that distinction anytime soon.

Coming Tomorrow- Continuing the Maryland theme, a guy for the Orioles who's suddenly become a huge deal for them.
Posted by Jordan at 10:31 PM