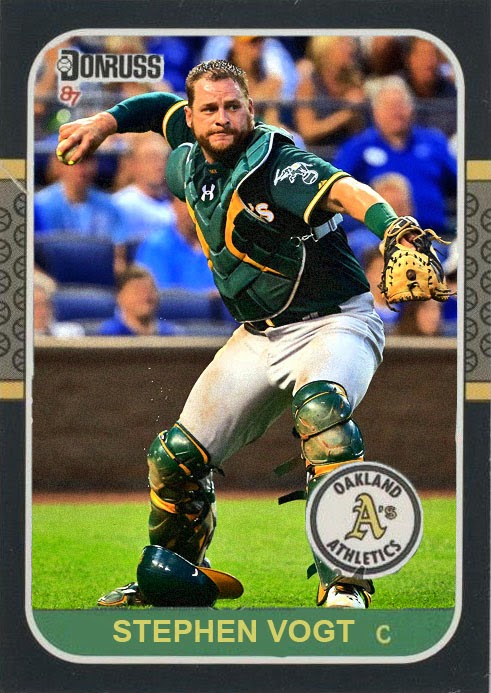 Stephen Vogt was one of those names I learned through Topps Bunt.

Yeah, for a good two-month period, I was a member of Topps Bunt. And while I'm the farthest thing from a spokesperson, I'll say that this stint in Bunt did introduce me to a lot of good baseball info. By the way, I'm gonna write up a lot of things that happened during my Bunt experience sometime soon, because there is a lot to tell.

Through Bunt, I did find out about a lot of under-the-radar players that I didn't know about following the game. People like Luis Valbuena, Juan Lagares, and Steven Souza, guys who are RULING this season, popped up as rare inserts in Bunt.

One of those guys was Stephen Vogt, and I figured out that he was a utility guy, not necessarily an everyday guy, in the A's system. He'd appeared in some games in 2014 (as Derek Norris' backup mostly), and he got some nice numbers in the batter's box. It was enough to warrant an inclusion in Bunt's special DIRTY HELMET insert set, which was numbered to about 900 copies, and swished around like wildfire during a certain week in November, after which it was basically forgotten.

So I kept seeing Stephen Vogt pop up in Bunt, even if he didn't get an actual base card, I was like 'I should keep a tab on this guy, just in case he gets big.' And sure enough, this year Derek Norris was swapped to the Padres, and Vogt became the only option at catcher, which the A's management was more than happy with.

Vogt has been off to a nice start, posting great numbers in the Home Runs and RBI columns, and just being a great force at bat. Plus, he's sort of been pushed to the center of this A's lineup, as one of the main forces of power now that Donaldson, Norris and Cespedes are gone, and Crisp is injured. So right now, Stephen Vogt, the Man with No Name, is powering a team that came close to the playoffs last year. It's funny how it all turns out.

Coming Tomorrow- Another Chicago Cub, this one being the unofficial team captain.
Posted by Jordan at 11:18 PM