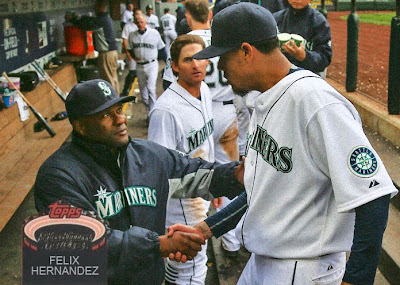 I'm going to say something absolutely serious about Felix Hernandez.

If he retired TODAY, he'd be a likely inductee into Cooperstown in 2021. The guy is the most dominant pitcher in baseball, has the best numbers, and is more consistent than anybody else in the game. The man has not had a down season since he hit his stride (albeit a few years in). I mean, Clayton Kershaw is scaring a lot of people because he's not having a great start. Tim Lincecum has lost all of his supporters because of his last few seasons. But already, not only is King Felix having a momentous start, but I can see him landing in the Top 5 Cy Young candidates in six months' time.

I mean...every once and a while, I'll joke that Felix didn't deserve the Cy Young in 2010, because...I for one, still think that C.C. Sabathia had a better year that year. But...I'm ADAMANT that King Felix should have gotten it last year instead of Corey Kluber. And the funny thing is it's the exact same issue. It's wins vs. power. And both King Felix in 2010 and Kluber in 2014 won based on power, not wins.

Thankfully, Felix Hernandez is not only powerful, but he's got some nice run support on him, and racks up a nice amount of wins.

I think that of anybody playing in the majors right now, Felix Hernandez has the best case for Cooperstown. He's made some Seattle records, has hit 2,000 K's, and has made a case for one of the best overall talents of the last 25 years...and he's not even halfway done yet.

Coming Tomorrow- This guy just homered against my Phillies tonight. However, he's the only thing propping up a confused, barren roster.
Posted by Jordan at 10:52 PM