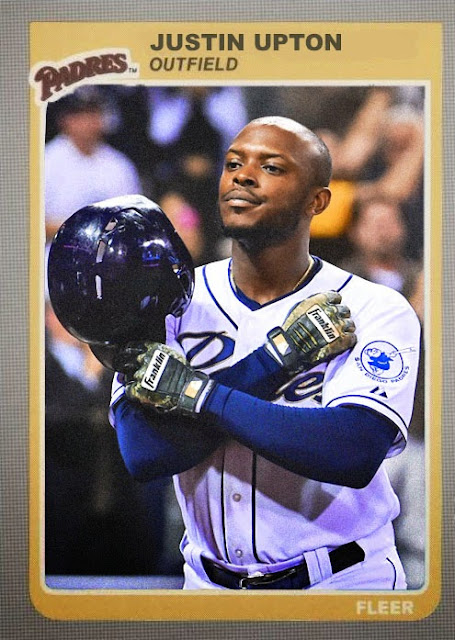 I don't know what it is with this guy. You just can't count him out.

The guy has had stellar hitting seasons with three different teams in the past four seasons. He's stayed relevant despite being on some hard luck squads, and now, with an even riskier squad, he's hitting even better numbers. The guy is unstoppable.

I think Justin Upton was secretly one of the best guys that came to the Padres this offseason. Because Kemp, Shields, Middlebrooks and Norris are all maybes, due to injuries and fluke seasons, and Shields was getting a lot of 'don't sign him, he's contract kryptonite' warnings. But Upton was still having a nice season in 2014, and was still posting really nice numbers. He's still technically in his prime, and he's still one of the best outfielders in baseball right now. So nabbing Upton was a nice move for the Padres, in addition to all the other nice moves they made.

I mean, the Padres are still trying pretty hard to get to where people said they'd be this season (and by people, I mean Padres organization dudes), but Upton is definitely chugging along, as are Shields and Kimbrel. So the spark is definitely there. Only problem is the Dodgers are doing even better, and are probably going to be the team to beat in the NL West. Denver and Phoenix may be non-factors in the long run here, so we're just gonna ignore them (and the Giants...I would like them to sit this year out.)

This is going to be tough for the Padres to pull out, but there's definitely a chance. I mean, it's only May.