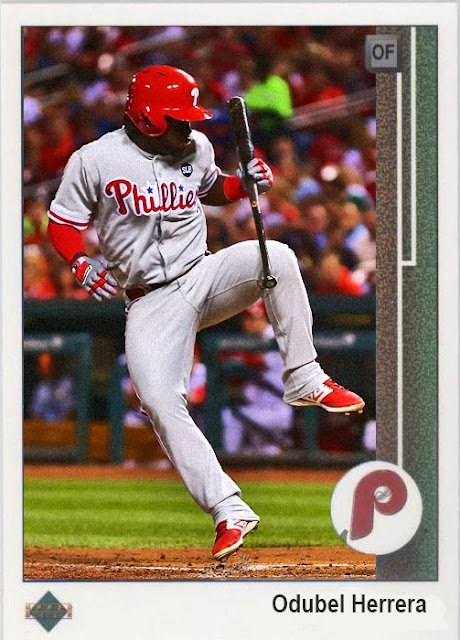 The really crappy part about the Phillies being successful for a nice chunk of time from 2008 to 2012 was that, because we gobbled up stars like cashews, our farm system...was not great. We gave people like Michael Bourn, Jon Singleton, Carlos Carrasco, J.A. Happ, Jonathan Villar and Jarred Cosart away to various teams (mostly the Astros), in exchange for people that didn't do all that much for us (Cliff Lee being the exception).

So now that the Phillies are sucking, they now have a chance to hang onto their prospect, and also gain ones from people trading for THEIR bigger contracts. Which means Odubel Herrera has his chance to shine, steal bases and be a fun player...in a Phillies uniform.

I'm gonna say it right now: I really, really like Odubel Herrera. I saw it in Spring Training, I said 'this guy will be good for us this year', and lo and behold, he's stealing bases and hitting and doing so well, even when the Phils don't (which is quite often this season). I think he's the burst of fun that this roster needed, because Utley and Howard are getting old (at least Howard's hitting), and Ben Revere cannot hit. Herrera is young, he's powerful, and he's a lot of fun to watch.

I would love to see this guy become like a Bobby Abreu-like presence in Philly, staying for a ton of seasons and gaining a huge load of fans. I know it's a lot to ask of a guy who just started this year, but it'd be kind of nice.

Coming Tonight- Hey, did I mention the Astros are doing really well? Here's a guy who left a subpar Cubs team and is hitting up a storm in Houston.
Posted by Jordan at 2:30 PM