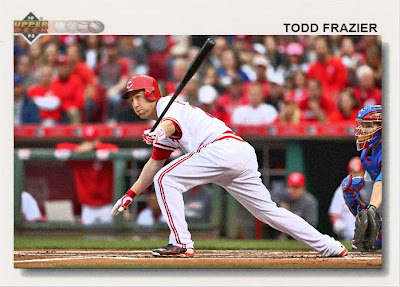 I feel like the Reds have a lot of problems this year, yet their hitting is getting noticed more than their flaws. Joey Votto and Todd Frazier are having really nice starts, especially Frazier, who is more and more becoming one of those guys you need to watch.

I mean, Votto is the team captain, the unofficial leader and all that, but Todd Frazier may be the most consistent performer on the team. The guy's a big-time home run hitter, he's capable of hitting out of tough situations, and he's from Toms River, NJ.

The main issue the Reds have been dealing with is their lack of real pitching. Other than, say, Johnny Cueto and Mike Leake, there's not a lot going on, and there's not a lot of security on some select days. Runs are getting by, and the run support hasn't been great, aside from Frazier, Votto, and Mesoraco. People like Bronson Arroyo and Mat Latos are elsewhere, and it's hurting the Reds.

Good news is that, even if this season they've basically been counted out, there's enough of a base for them to build upon for next season. There is some definite talent there, and all it needs are some supplements. Plus, this lineup hinges on everybody being on the same page, so when people like Brandon Phillips and Jay Bruce aren't hitting, it's not helping.

I hope this team can eventually get back on track, because people like Todd Frazier could really rock the house if they're allowed entry into the postseason.