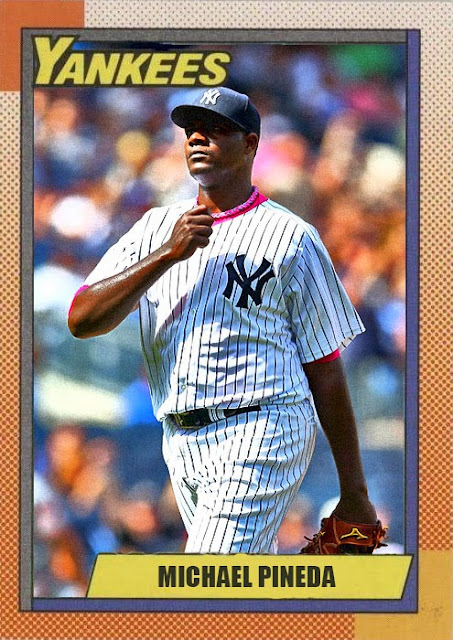 I wish Michael Pineda's career was like that. Where I could just group together his 2012, 2013 and 2014 seasons, and fold them in so his career is just 2011, 2015-onward. Because his debut season in 2011 was outstanding, and the sole reason why we plucked him from Seattle in the first place (for Jesus Montero and Hector Noesi, which has given me my good laugh of the morning). And now that he's had a few minutes to rebuild, reform, and use some pine tar, he's finally having a season worthy of why we got him.

On Mother's Day, he had a colossal start, striking out a ton of batters and keeping 100% dominant through the whole game.This is something he couldn't have done last year, or at least to this caliber. He's grown as a player, and as a pitcher, and I'm so glad it's been with the Yankees.

For the rest of the season, he needs to keep that momentum going. Right now Pineda is technically our first starter, because Tanaka is hurt again and CC Sabathia's balls have deflated, which in this sport is not as good as in some of the other ones, especially metaphorically. He is the guy we're relying on the most, and even if Nate Eovaldi is giving some good stuff, we're relying on a lot of younger, less experienced (and more innocent, if Bono needs any more money) pitchers in place of injured ones. So Pineda needs to stay dominant, especially as dominant as he was this past weekend.

Coming Tonight- This is the kind of guy that can hit bombs for any team he's played for, and still give a nice performance. Now he's with a surging Padres team, and he's definitely keeping his own momentum going.
Posted by Jordan at 1:44 PM
Labels: Custom Cards, Michael Pineda, remembering Jesus Montero exists, Yankees