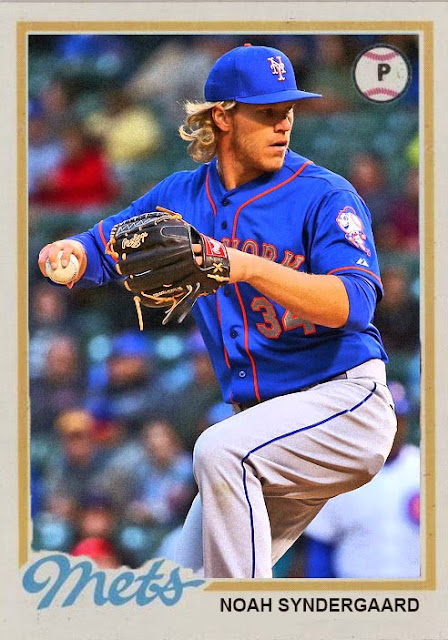 In Matt Harvey's debut, he struck out 11 Diamondbacks and hit a double off Wade Miley.

In Zach Wheeler's debut, he struck out 7 Braves and pitched six scoreless innings.

Noah Syndergaard, talent aside, didn't have as eventful a debut as those guys.

Kris Bryant, Jorge Soler and Starlin Castro got the better of Syndergaard, hitting off of him and stunting his debut to six innings. Now, you can argue that Alex Torres and his incredible hulk cap were the real losers of that game, but still, Syndergaard was not untouchable. He was...touchable, if you will.

I'm not saying this is gonna reflect the rest of Syndergaard's career. Your first game doesn't set your path in this game. For instance, in Javier Baez' first game, he actually played well.

I imagine Syndergaard's gonna have starts that are gonna be so much better than his showing Tuesday night. He's better than that. He's more powerful than that. And if the Mets have Harvey, Wheeler and Syndergaard ALL HEALTHY...they are gonna rip the walls off the place.

Coming Tomorrow- He threw a gem of a game tonight. And his team really needs his stuff lately.
Posted by Jordan at 11:16 PM
Labels: Custom Cards, Mets, Noah Syndergaard