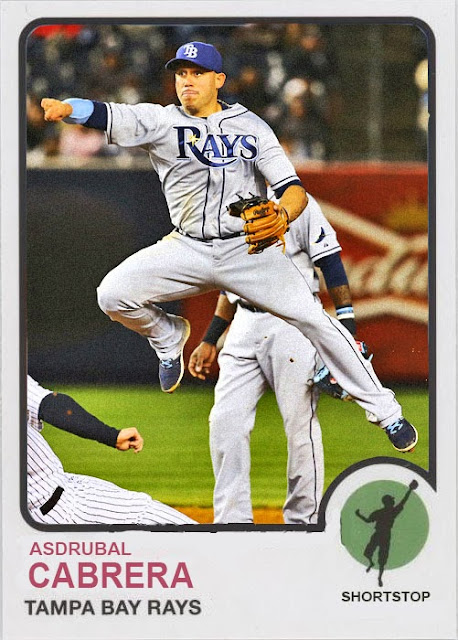 This guy's probably one of the most underrated infielders in the game right now.

I think the stuff he had in Cleveland was pretty nice, and it was a shame that he couldn't transfer 100% of it to Washington. Which is why I'm pretty happy he's back in the AL, even if he is in fact playing in my division. The Rays are definitely depleted after letting go of Ben Zobrist and Wil Myers. So Cabrera is the kind of hard-hitting infielder that they need. I'm glad he's fitting in that kind of dynamic.

The Rays probably aren't gonna do a ton this year, but I'm glad they have somebody like Cabrera. Him and Tim Beckham are a pretty nice double play duo, even if Beckham's a bit more inexperienced than Cabrera.

I have no problem with Asdrubal Cabrera on the Rays. Which means I hope he has a pretty nice season.

Coming Tonight- The man they call the King.
Posted by Jordan at 11:07 AM
Labels: Asdrubal Cabrera, Custom Cards, Rays