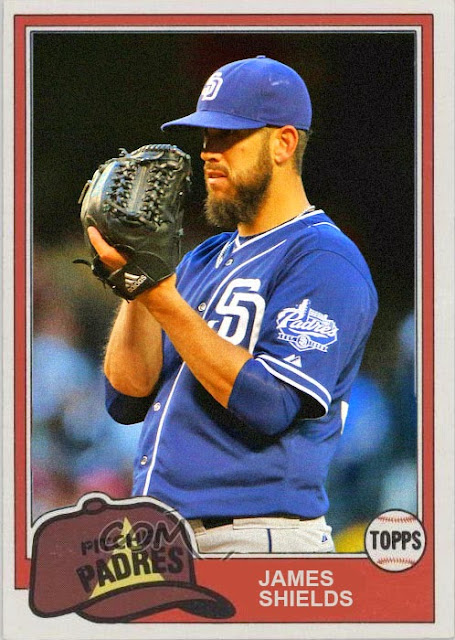 We were a little worried about James Shields.

When the postseason began, and people began to get gobbled up, people started posting their opinions on the inter webs about who was a good deal, and who was not worth a damn thing. And I saw, a bunch of times, articles on ESPN or SI or whatever, saying DO NOT UNDER ANY CIRCUMSTANCES WHATSOEVER SIGN JAMES SHIELDS.

Which was news to me.

I mean it, they had articles saying 'if you're thinking that these people will get signed quickly, think again, because given a high contract, they could be trouble.' And James Shields kept showing up on these lists. And that was...surprising, because Shields had a wonderful season in Kansas City last year, and has been one of the more reliable pitchers out there for the last couple seasons. So I was like, 'people don't WANT this guy? Hmm."

And sure enough, months went by, and he was still on the table. Him and Scherzer. And I'm like "you can't seriously expect me to believe that people don't WANT THESE GUYS. Max Scherzer's one of the best pitcher in baseball, and James Shields was a huge part of why that Royals team got to the World Series. WHAT GIVES?" And I was worried that he wouldn't get signed, which is the kind of thing you'd worry about over a 38 year-old.

But, lo and behold, San Diego came through and snatched him, because I think San Diego's GM said "what, we don't have HIM yet?? We've got everybody else." And so they grabbed him, threw him on the rotation, realized they had a Shields-Ross-Cashner-Kennedy combo, and cheered.

So far, James Shields has been pretty great for the Padres, throwing some nice games, nabbing some wins, and being the dominant, strikeout-throwing presence he was in the AL. So I don't think people should be too worried. If he starts becoming Roy Oswalt and stops being competent halfway through the contract, THEN I'd get worried.

But yeah, Shields is playing pretty well. So, to all those guys who said 'DON'T SIGN HIM!', well...nyeehhhh!

Coming Tomorrow- The Indians are a non-factor this season, but slowly, and surely, their top hitter is definitely becoming a factor.
Posted by Jordan at 11:36 PM
Labels: Custom Cards, I swear I wrote this sober, James Shields, Padres