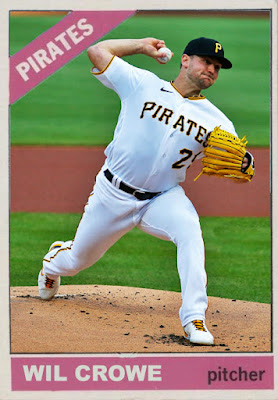 Doing an Uncustomed Heroes post on the 2021 Pittsburgh Pirates puts me in a strange position. In that I literally did all the actual relevant stars on this team during the season. So this is literally an unsung heroes post. It's all under-the-radar starters and people who came up or were signed after the deadline.

So I don't think Topps has done cards of any of these people for 2021. So, once again, I'm doing all the work for them.

2021 was business as usual for the Pirates. 100 losses, big stars traded at the deadline, one genuine big player [Bryan Reynolds], and a lot of little guys who you'll forget by next year. One of said little guys was Wil Crowe, who started 25 games for the Bucs this year, the most of anyone, and went 4-8 with a 5.48 ERA.
2022 Prediction: Hopefully becomes a lower-tier starter without much need as the other starting weapons develop. 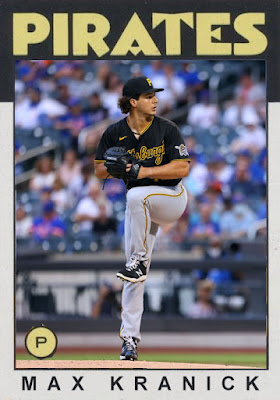 Max Kranick's rookie season began with a bang, as the Scranton native went 5 scoreless, hitless innings over St. Louis, with 3 strikeouts to boot. The rest of the season wasn't as starry, as in 9 starts he'd have a 6.28 ERA with 32 Ks. In the tradition of Nick Kingham and Mitch Keller, Kranick is a solid arm who just is very unlucky with this sort of shorthanded team.
2022 Prediction: Has an outstanding start, but evens things out over time. It will be an improvement, though. 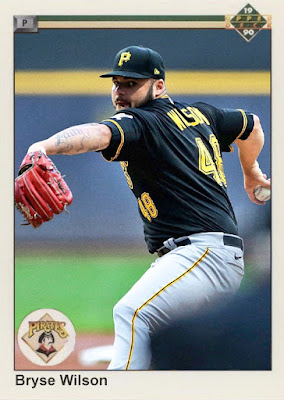 Onto the trade returns. In exchange for their closer, Richard Rodriguez, who I'm hearing might be back next season anyway, the Pirates got Bryse Wilson from Atlanta. Wilson had a big-game start in the postseason last year, so we know he can have big moments. In 8 starts he went 1-4, with a 4.91 ERA and 23 Ks. Not a great start, but they're hoping he'll develop.
2022 Prediction: Of all the new arms, he has the best chance of being an immediate rotation standout next year. 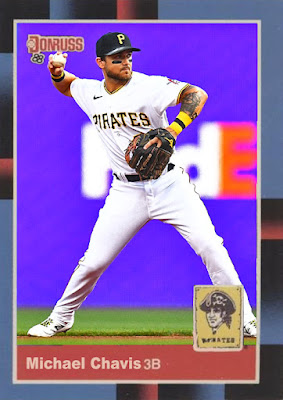 In a deal for reliever Austin Davis, the Red Sox sent Pittsburgh former infield prospect [who had been nullified by Kiké Hernandez] Michael Chavis. Chavis has always been capable of a great deal, and just needed some room to grow. In 12 games, he certainly had that, hitting .357 with 15 hits and 5 RBIs. Then...he got hurt. So much for that.
2022 Prediction: I genuinely think he's the starting 1st baseman next year. He may even be the starting 2nd baseman next year. And he's gonna produce a very big statement. 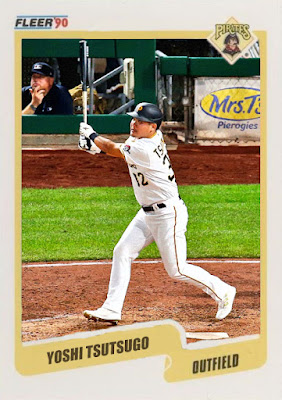 After failing in two postseason markets, Tampa and LA, Yoshi Tsutsugo signed a deal with the Pirates, and it was there, out of the pressure, that he produced his first excellent numbers. In 43 games, Yoshitomo hit .268 with 25 RBIs and 8 homers, becoming beloved by the end of the season, to the point where he'd be re-upped almost immediately.
2022 Prediction: Maybe not as iconic as this year, but he'll have some decent numbers that'll keep him starting all year. 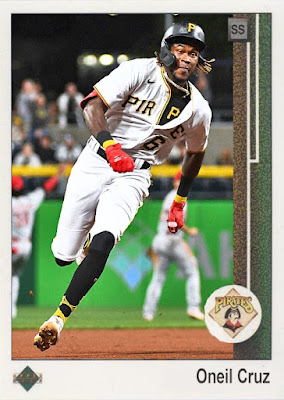 And finally, the biggest sign that the Pirates finally may have something brewing for the future is that in the final moments of 2021, they brought up Oneil Cruz, their 6'7 shortstop prospect [and before you say he's too tall to be a shortstop, remember that I am ALSO 6'7, regardless of whether or not I prefer a corner infield spot during pickup games] for two games. In 9 at-bats he had 3 hits, 3 RBIs and a home run. People should start getting excited right now.
2022 Prediction: This is your NL Rookie of the Year. Get ready right now.