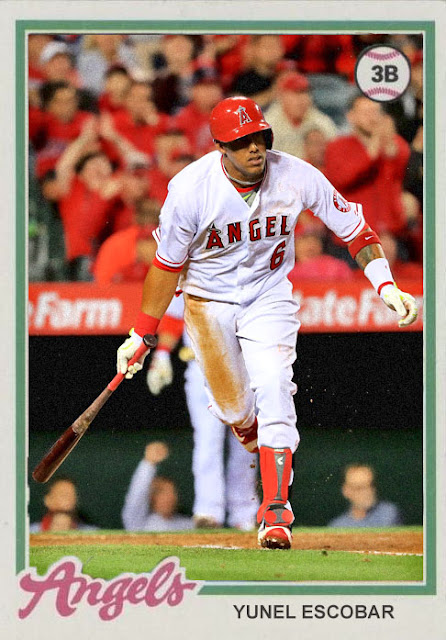 Ya got no catcher...got no shortstop...your ace is getting Tommy John surgery...the bench is all on the DL....man, if it weren't for Yunel Escobar doing his usual Yunel Escobar things, and Mike Trout, this Angels team would be kinda screwed.

It's a shame, because these guys were playoff-ready for a few years back there, to see everybody either injured or under the Mendoza line, is kind of sad. Pujols isn't completely gone, like he was earlier this season, but he's not as on as he was last year. The newbies that killed in 2015 are kind of ineffective. Matt Shoemaker found a way to be even worse than he was last year.

Yunel and Trout are pretty stellar right now though. Trout, because...he's Mike Trout, and he can do no wrong, but Yunel Escobar's coming off a pretty awesome 2015 with the Nationals, and has developed into a surprisingly lethal third baseman, after a few years laying low in Atlanta or Toronto. He was one of the few offensive contenders that kept Washington going last year after the slump, and he's still doing pretty damn well keeping the Angels alive.

Now...this could mean that he could end up somewhere like Boston after July 31st rolls around, but it also could mean that he could stick around, and help pump up the rest of the roster by example. Mike Trout's amazing and stellar, but even Mike Trout's having a down season by Mike Trout standards. Yunel's on the same path as he was, and he's not looking like he's gonna slow down. The Angels NEED somebody like that, desperately. Hopefully they'll hold onto him for a little longer than July.

Coming Tonight- Yeah, might as well get around to posting that awesome rookie pitcher for the Dodgers.
Posted by Jordan at 4:38 PM