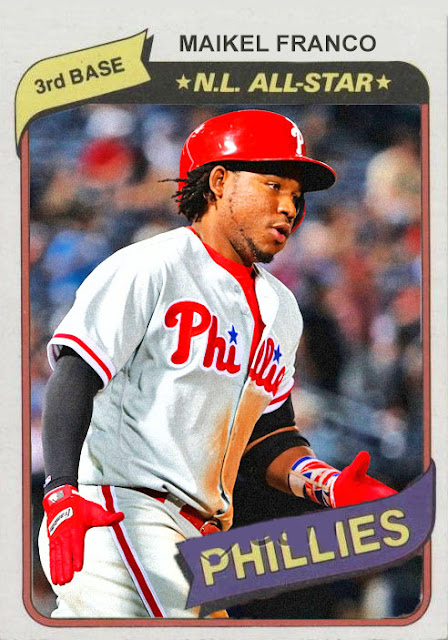 Let me tell you, it's pretty interesting living in Philly this year, with all that's going on with the big ol' sports team right now. You have a ton of people going in with the whole 'we're gonna lost 100 games' mentality this season, because of how things went in 2015. And somehow...we're 2nd in the NL East, ahead of the Mets, and the youth movement that wasn't supposed to kick in for another 5 years is propelling us back to the top.

So, people have this sort of weird optimism. It's very hard to explain. Yeah, they're not going to games, as you can plainly see, but they have this faith that they'll find a way to win. For the first time since the early part of the decade, I'm seeing Phillies jerseys out in town. The fan base is coming back in big numbers. I don't think any of them are wearing Herreras or Nolas or Francos yet, because we all thought they'd be gone by September, so stocking up on their merch felt a slight bit counterproductive. It's mostly Utleys, Howards and Halladays still, but the fans are still coming back, and the hope is returning.

In Philly, the hip new hashtag is #BeLikeMaik, which is, of course, referring to hip, fun new third baseman Maikel Franco, who debuted last season, and after some DL time, was playing some stellar baseball by September, and, while not at the Odubel Herrera levels of killing it, he's still doing pretty damn well, and capturing the spirit of the fan base, which is kind of a good thing in someplace like Philly where the fan base is dying (again).

Once again, I have no idea if the Phillies are going to STAY this amazing, or if this is all gonna die in a month or so, but whatever keeps giving the fans hope, I want it to keep happening. This is good news for a lot of people who thought we were dead in the water. It's also good news for me that I at least have my hometown team to root for while my college-town team is doing horribly right now (and it's NOT Girardi's fault!)

Coming Tonight- Third baseman for a middling AL Central team who's figured out how to keep an incredibly high batting average.
Posted by Jordan at 1:00 PM