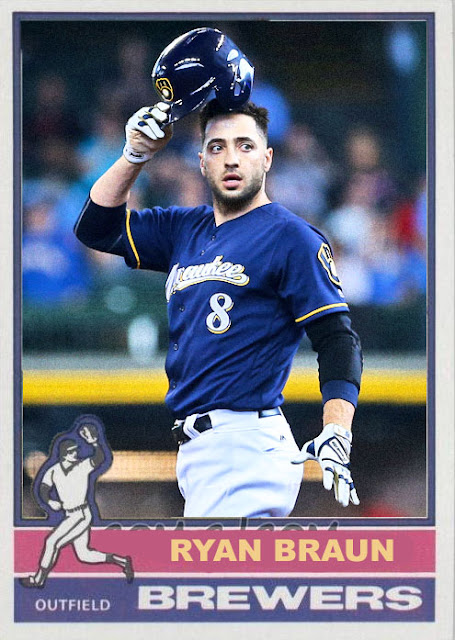 I really don't know what to think of this guy.

Ryan Braun's been caught using human growth hormones twice now. After his first time, he came back, reclaimed his team, and went back to normal. After his second time...that bit has taken a little longer, to the point where I'm not exactly sure whether or not to like him.

Last year was Braun's first full season since his HR-Leading season in 2012. He only hit 25 home runs last year, but made an All-Star team and stepped up as the leader again amidst the disappearance of people like Carlos Gomez and Aramis Ramirez. So, now that the Brewers are circling the bottom like this again, they need someone like Braun to be the anchor. So far...he's been adequate, I guess.

Ryan Braun post-steroid-allegations has been kind of unspectacular, mostly because he stopped juicing, but also because of a lack of self-confidence. Last year was a tiny bit better, but if he can do something right while off of HGHs, he can get back into the fold again. I don't know if the MLB public is ready to accept Braun with open arms again, but he seems to have the right idea.

Brewers probably won't trade him this year. They wouldn't do that. Get rid of Lucroy or Gennett or Chris Carter, but not Braun. He's, like it or not, the face of the franchise. And until they get a face that isn't famous for steroids, this is how it's gonna be.

Coming Today: The shortstop for that team that used to do really well, but then sucked, and is now doing really well again.
Posted by Jordan at 3:25 AM