Rich Hill, and Other Guys who Escaped the Binder 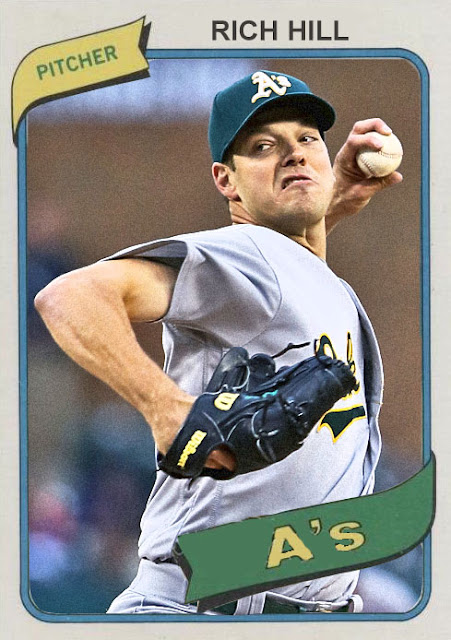 Since I got into the hobby, I've kept my collection in binders, and grouped them all by team, by player, etc. In 2007, when I was first starting to collect, Rich Hill was still a pretty prominent starter for the Cubs. So, he was in my binder, in the 'current pitchers' department, as a Cub. In 2009, upon his trade to Baltimore, he lost his place in terms of relevancy, and since he wasn't particularly worthy of being 'good' anymore, I took him out of my binder.

That's sort of how I did things. I didn't want to leave people in that had no real business being there. Francisco Cordero sealed his fate upon his trade to the Padres in 2012. Some players I'd stop seeing in the MLB previews of that year, and I'd take them out accordingly.

It's not everyday that someone I take out of the book breaks back through and catches my attention. Jose Bautista, Edwin Encarnacion, Mark Trumbo, J.J. Hardy and Coco Crisp has all been through this. Scott Kazmir was one of my more recents, going from Rays ace to Angels dropout to A's star again.

And now, it appeared that Rich Hill had been the next one. In Boston last year, Hill pitched five spectacular games toward the end of the year, which prompted the A's to pick him up. So far, Hill's been smooth, and one of the more reliable starters on the team.

I'm just glad he's relevant, especially after a good 7 years out of my binders. You don't hear comeback stories like that very often, and I want this one to keep going as much as possible. They're refreshing, and they're good for baseball.

Coming Tonight: He won a World Series last year, and if the superstitions are correct, he'll win another one this year.
Posted by Jordan at 8:54 AM