Papi Fields (for the last time) 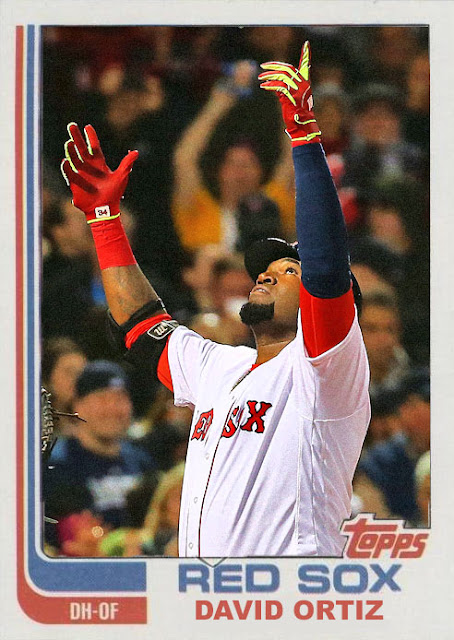 (This post is brought to you by 'A Smidgen o' Pigeon', and the National Society of Dominican Foods)

It's incredibly weird when someone who's been playing since before you started collecting retires. It's even crazier when that person is David Ortiz.

It's hard to imagine baseball without him. I just picture Fenway...and he's there! It's just a fact of life. This is something that happens. Which is why the little 'farewell tour' he's doing is so alarming to me.

Like, he'll be in Houston and they'll give him a cute little cowboy hat, or somebody gives him a surfboard. It just feels eerie, like it shouldn't be happening. This is David Ortiz! He's the master of fun and not taking baseball seriously, just whomping home runs every few seconds. He shouldn't stoop to the level of letting the guys he beat down on give him little gifts! Jeter or Chipper I can see that happening to, but not Papi. He's ferocious! He shouldn't have any mercy!

He should take whatever little tchotchke they give him, and smash it with a bat. That's more Papi's style. Maybe instead of all those big space-takers, they should just get him some food or something.

It took me a while, but I've grown a ton of respect for David Ortiz. Sure, he hits a lot of home runs against the Yankees, maybe broke up a few too many NY no-hitters, but he still has the right idea about how baseball should be, and I'm gonna miss him. Not as much as Jeter or Mo, but still.

I'll be watching this farewell tour intently, and seeing if he does anything worthy of Papi himself.

Coming Today: Dude just threw 20 strikeouts the other day. Just reestablishing the fact that he's one of the best pitchers in baseball.
Posted by Jordan at 9:04 AM