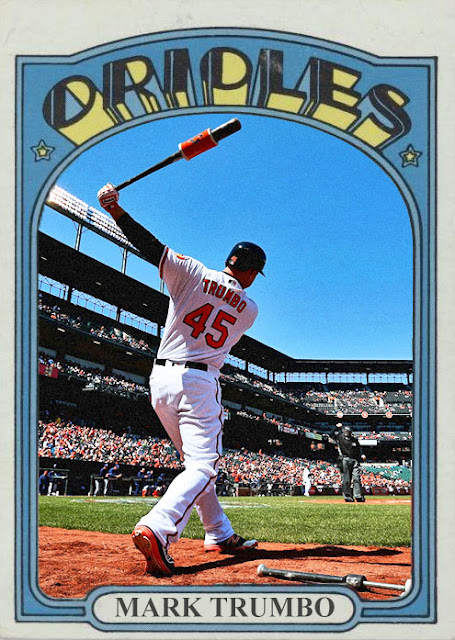 A few years ago, in an effort to stay on top of things in terms of writing, I had a post at the end of every month summing up the big stories, and I kept it going all year. Because I've been very substance-light (again) this year, I figured I'd roll that strategy out again. So, as Mark Trumbo was basically the face of April 2016, let's talk about April under this beautiful custom of his.

To start, Five Things from April 2016 That No One Could Predict
1. First Place White Sox. Seriously, look at them go. The pitching is on point, led by an especially hard-throwing Chris Sale, and the new infield is a success, thanks to Todd Frazier and Brett Lawrie. They've earned one of the best records in the AL, which is something nobody could have predicted before this season. Heck, they're so far ahead that everyone else is at least 3 or 4 wins behind. This is something that's a long time coming, and that had been brewing for a while, and I'm glad they've finally gotten good.
2. Last Place Astros. This one really hurts, especially given the success story of last year, the one that caught the hearts of millions of sports fans. After rising to first and riding into the playoffs, the Astros...are right back in last. Nobody's hitting, the pitching's failing, and the rest of the AL West has taken advantage of this. I'm hoping they turn it around, but this is not a good sign.
3. The bats in Baltimore coming alive. Not just Mark Trumbo, the man at the top of the post. Manny Machado, Chris Davis, JJ Hardy, Adam Jones. All playing beautifully. Hardy has since wound up on the DL, but Manny Machado has come into his own, moreso than he did last year. Trumbo has completely erased the last two seasons of inconsistency, and is hitting like a champ. Even if the pitching is catching up to them, the bats are a huge statement for how the AL East is going to go.
4. The Phillies are winning games! They're not in first, nor did I expect them to be, but they're actually doing pretty well for themselves. Ryan Howard, somehow, has remembered how to hit home runs, as has Carlos Ruiz. They've won their last six games, on the heels of people like Odubel Herrera and Vince Velasquez. Nobody knows how they're doing this, but they're in third right now, and they're actually staying afloat. Here's hoping they keep it up.
5. Greinke and Miller deflate. Zack Greinke and Shelby Miller were brought into Phoenix to bring a whole new era of strong arms to the team, and make the D-Backs a force to be reckoned with. Both are getting absolutely killed by NL batters. It's kind of hard to watch, especially considering how awesome both of them were last year.

Now, Five Things That Aren't Very Surprising at All
1. Surging Nationals and Bryce Harper. Yeah, this isn't too much of a scare. Harper's picking up exactly where he left off last year and the Nats are on his back.
2. Last place Braves. I don't think we knew they'd be THIS bad...but they're pretty friggin' bad.
3. Unstoppable Cubs. Everyone, going into 2016, knew the Cubs would be huge, and here they are ruling the NL. That works pretty well.
4. Disappointing Yankees. The division was stacked against them long before the season began.
5. Some rookie out of Arlington coming up and hitting like hell. This happens every year. This year, it was Nomar Mazara.

Finally, here are Five Things I'd like to see happen in May:
1. Both Chicago teams to keep the momentum going.
2. The phrase "third place Cardinals" to continue to be applicable.
3. Someone in the NL West to come out in front. Right now they're all just fighting for first. I'd like a definitive frontrunner by June 1st.
4. Feel good teams like the Mets and Royals from last year to not be completely out of the race.
5. Someone from the Yankees to start hitting in a big way.

That was April, folks. Let's get onto May.
Posted by Jordan at 7:41 PM