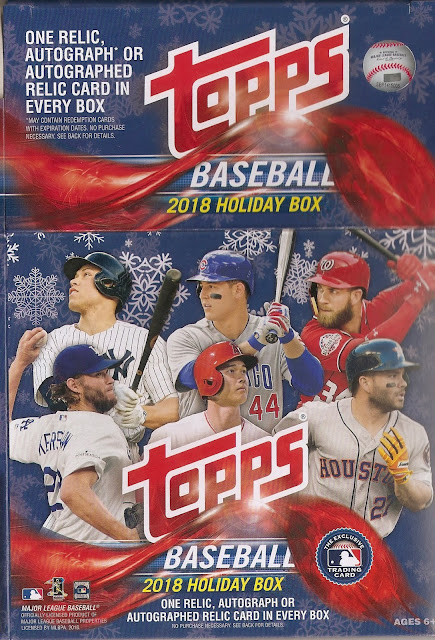 We've reached the dregs of the card-buying season. The point in the year where there's really nothing on the shelves truly worth buying except for reruns, repacks, old football boxes that nobody bought, and...Topps Fire, which I didn't especially WANT. But there you go.

And yet I wanted cards, because...it had been a hot second, and we need some tangible content on here. Wal-Mart had some surpluses of 2018 Topps Holiday. Now, I haven't bought the last few Holiday releases Topps has done, mostly due to the lightweight nature of the release, but...desperation, and the 'one hit per box' thing, got the best of me.

Topps Holiday is merely the flagship set...but slightly thicker and with snowflakes. It's the opposite of Opening Day, which represents Spring and new opportunities. They should call it Closing Day, because everything is cold and depressing.

Like I said, one hit per box, in ten packs. Thanks to my 'guaranteed hit' from 2018 Topps Update, which was a manu-plastic-thingy that isn't in any way a hit, I'm skeptical, but...I'm not getting this JUST FOR the hit. I'm getting this because I haven't got any better options. 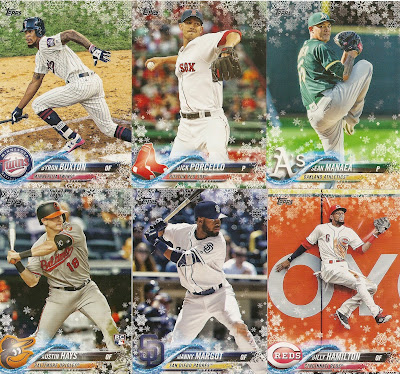 Pack 1-
So yeah, this is what it is. If you've seen Flagship, you know exactly what you're getting, but it's pretty amusing how the snowflake gradient factors in. On Hamilton's, it just looks like the wall needs to be cleaned. On Buxton's, it just makes the action shot a bit cooler. 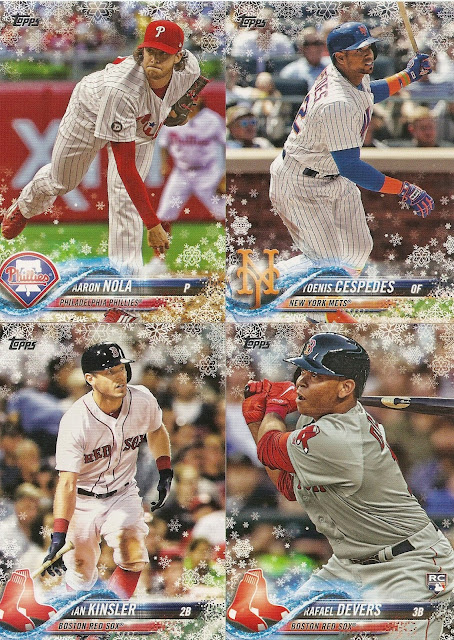 The pack highlights, at least for me. Nola's is a must have, as I'm slowly becoming a player-collector of his. Kinsler's brings up the point that Update Series cards are also included in this checklist, which is a nice touch. 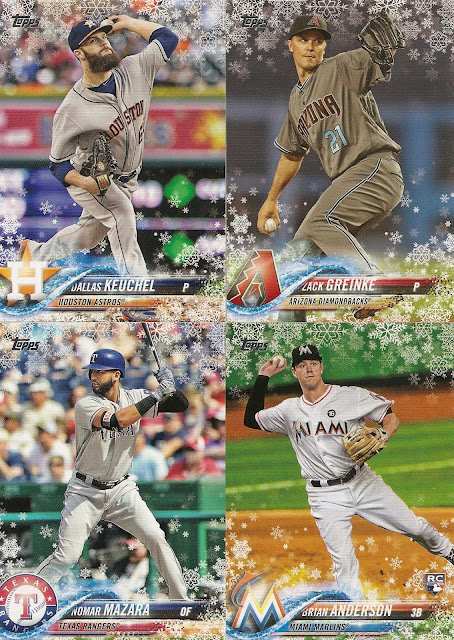 Pack 2-
Standard base. Something about the way Greinke's blue number pops with the gradient is kinda cool. 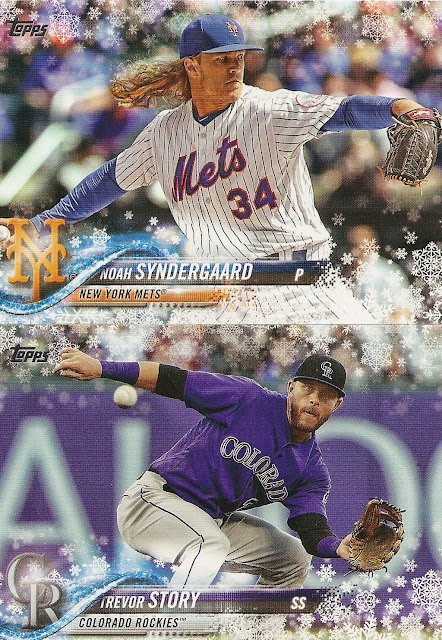 Horizontal highlights. Thor looks like a boss, but what else is new. I like that the gradient is slight enough on Story's that it doesn't really impede much on the loud purple tones. 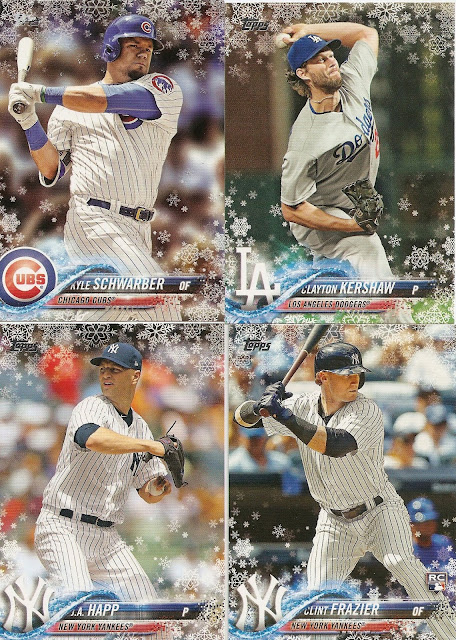 Personal highlights. The Schwarber is a 1-in-2 Metallic Snowflake parallel. You can't really tell from the scan, but some of his card's gradient pops a bit, and is a more metallic finish. It's slight, but in a set without inserts it's pretty cool.
And Happ and Frazier are always welcome.

Pack 3-
Standard stuff here. Seager and Encarnacion's teams have been doing some dealing with each other this year. Now they're teammates, I think.

Some cool horizontals. The snow looks kind of odd on Gordon's, but the Felix and O'Neill ones benefit from it, I think. 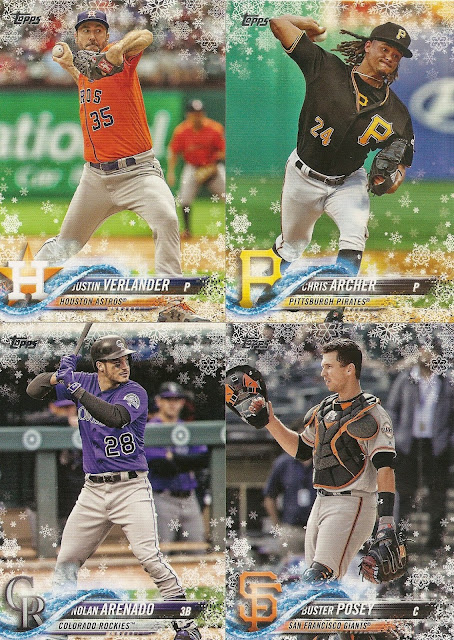 Pack highlights. It's nice that Topps picked a different photo for Chris Archer than his Update release, which is a nice touch. The rest are the same, but they're still pretty cool, especially Posey's. 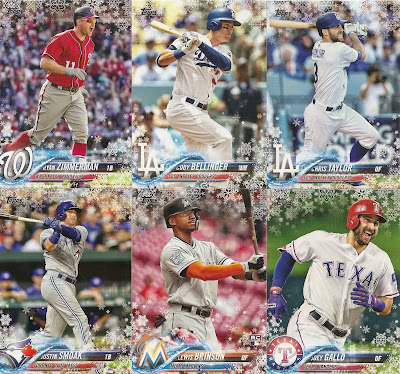 Pack 4- Standard base stuff. The one problem with making the gradient the same for each card is you run the risk of having the snowflakes interfere with the photo, like it nearly does with Gallo's, getting damn close to his helmet. If it weren't standard, it'd give you more room to have fun with it. Heck, you could make only the batter's figure pop out and cover the rest in snow, as a sort of reverse of the 2009 Black packs. 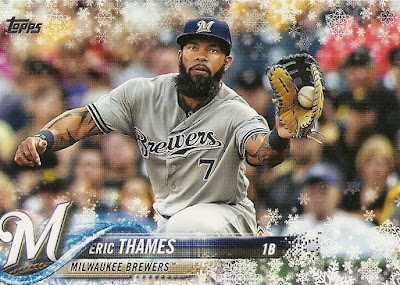 The lone horizontal in this pack. I think it looks pretty cool in the snowflake pattern. This box is also an excuse for me to evaluate 2018 flagship cards I didn't end up pulling. This Thames one is pretty nice.

Highlights. Fowler's is a metallic snowflake. How funny is it that of these three, Fowler's the only one staying in that uniform for 2019. 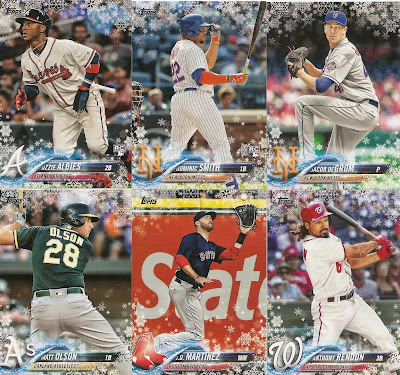 Pack 5-
Base stuff. I feel like the more dramatic the card, the more fitting the snowflakes are- the Smith and Olsen ones work with these, I think. But also, action shots, like Martinez and Rendon, also work. 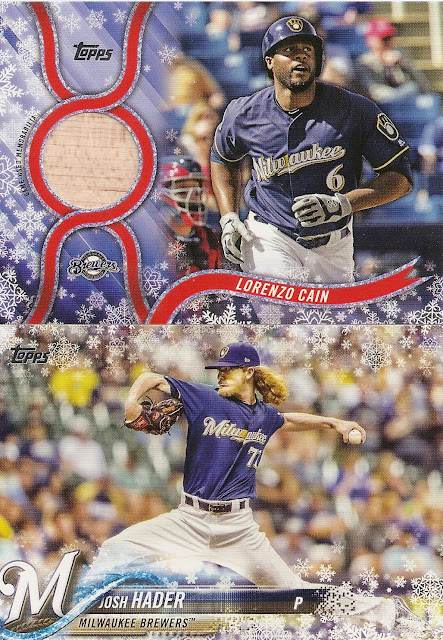 So this was my hit.

I put Hader in as an extra Brewer, but getting a bat card of Lorenzo Cain in an ASG-Caliber year for him...where he made the NLCS? Not bad at all. I like that this wasn't just another plain white swatch of a Baltimore backup outfielder or something. BAT CARD...of a great player. Nice job, Topps. 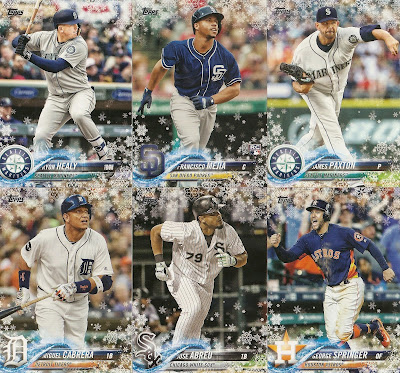 Pack 6- With the suspense out of the way, the rest of this box is still kinda cool. Again, I've seen most of these before, but Mejia's San Diego uniform still looks fresh. 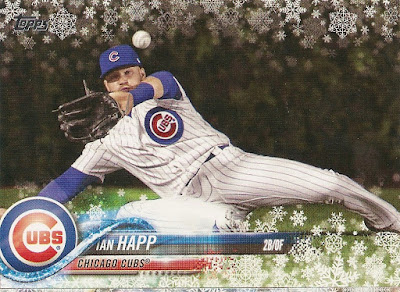 Didn't have the flagship version of this. 'Tis a nice shot.

A trio of Pirates ends this pack. Marte's is a metallic snowflake. 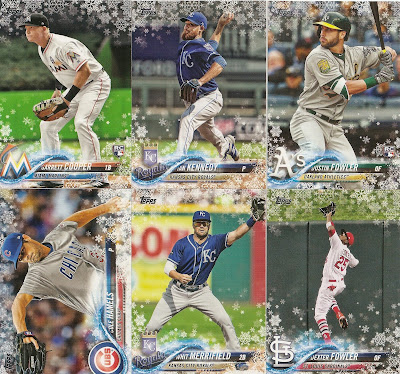 Pack 7- Fun base standards. Merrfield and Hamels are the only ones here who had a halfway decent year. 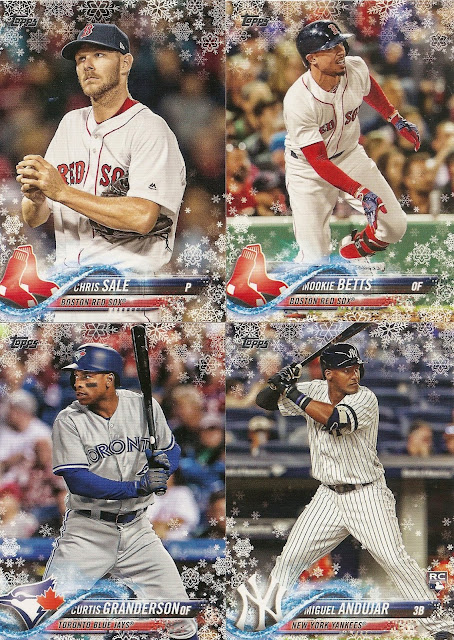 Some definite highlights. Andujar's rookie is cool no matter what the theme is. Plus, depictions of Curtis Granderson's brief-but-awesome tenure with Toronto are always welcome in my house.

Pack 8- Commons. Merrifield's is a metallic snowflake. Newcomb's looks even cooler with the gradient.

Some cool sideways shots. Anderson's is the best, which is why he gets to stay on his team this year. Bruce and Dozier won't be so lucky. 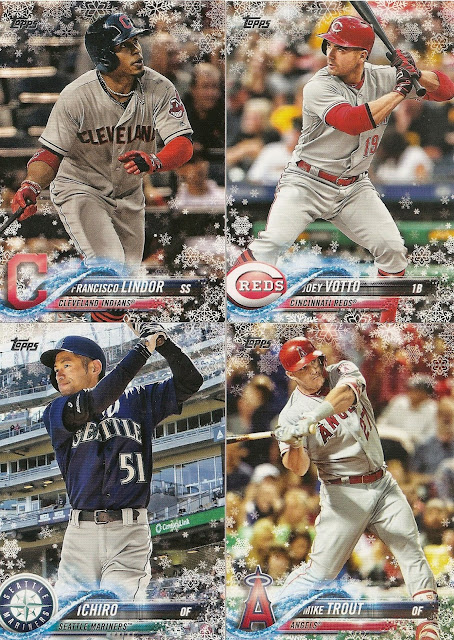 Genuine legends right here. All benefit from this gradient. Ichiro's might be the coolest, as it works with or without the snowflakes. Because he's Ichiro, and he's that awesome. 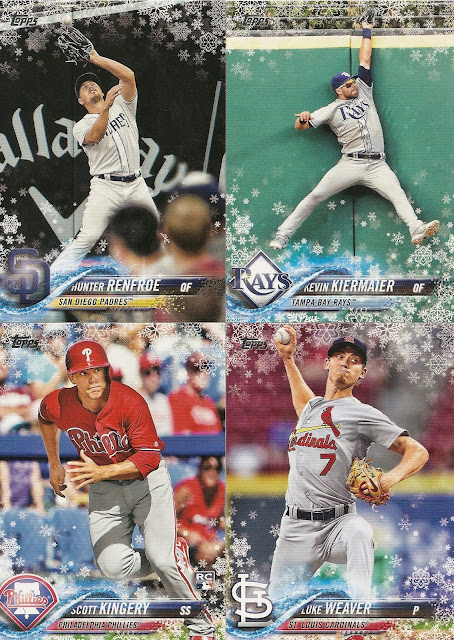 Pack 9- Unspectacular base stuff early on. Kingery's does stand out, as the bright red and the white border do mix well. Renfroe's is just a great photo. 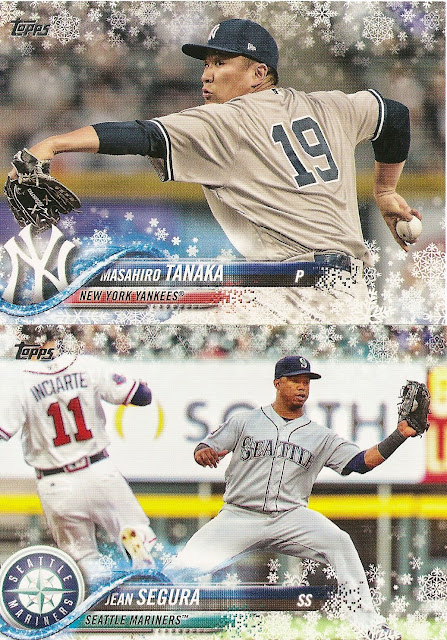 Horizontal favorites. It is kinda nice, though, that I really liked Segura's style of gameplay before he joined one of my teams. And Tanaka's just awesome. 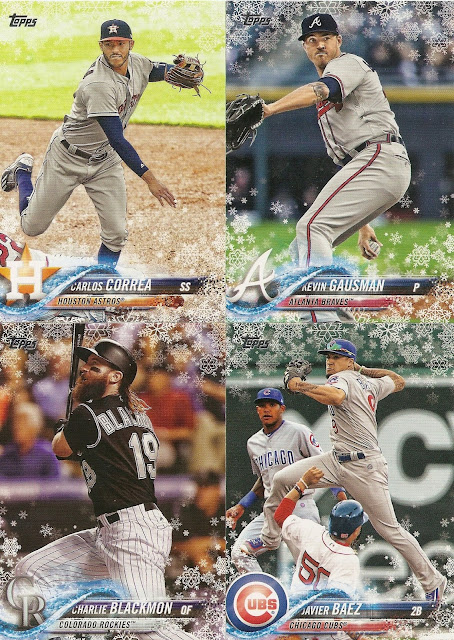 Base highlights. None of these photos were especially new to me, but the Correa one does fit the best with the theme, I think. 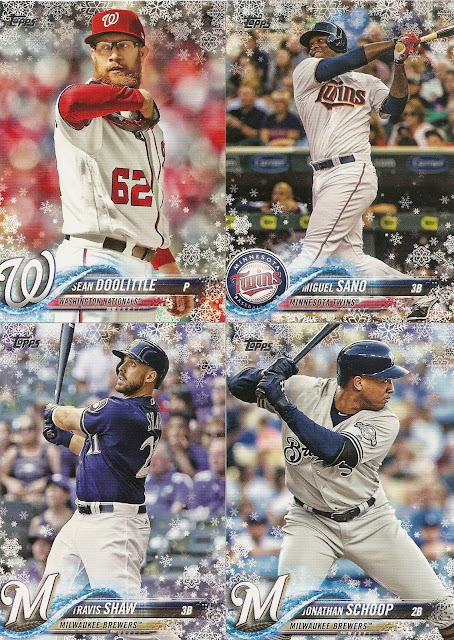 Pack 10- Doolittle's reds stand out the best here amidst the snow. Also, the beard doesn't hurt either. More Brewers add to the unintentional theme of this box, even though Schoop's year in Milwaukee wasn't great. 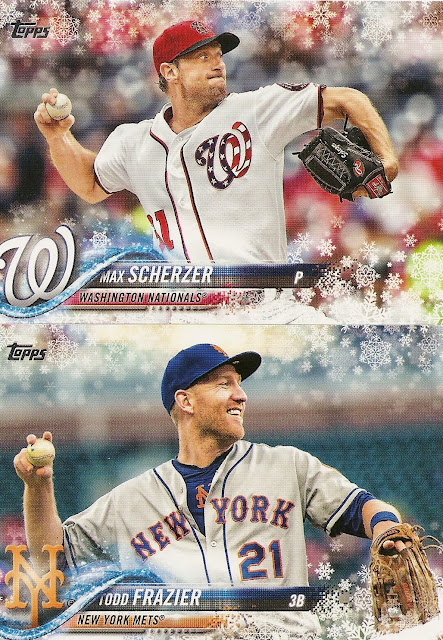 Both of these cool photos work with the snowflakes. Especially the Frazier. Hell, that just improves the original card. 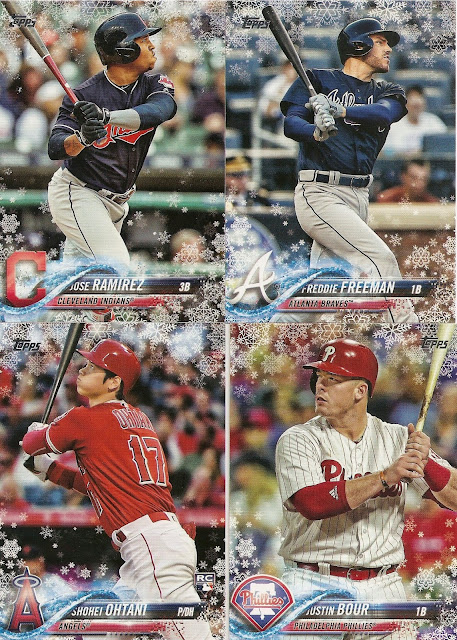 And we end with a Ramirez metallic snowflake, a welcome Ohtani RC, and...the most intriguing card of the box. Justin Bour's is a card that wasn't in Update or flagship, as his Phillies deal went through after Update went to print. So this Justin Bout card is a rarity that won't be found anywhere else. And as a Phillies fan, that's pretty nice.

If the Bour deal went through on August 10th, WAY before this went to print...what was stopping Topps from adding LATER waiver trades to this set? Hell, how come Curtis Granderson still gets a Blue Jays uniform, but Bour gets his new one? If you're making room for some, why not make room for all? I know August 31st is a bit closer to print for Holiday, but...there could have been more room made.

Again, it's silly, and I'm glad I got a Bour Phils card anyway, but...c'mon Topps!

Overall, this box was...amusing. I'm certainly glad I got some of these, especially the Bour, Archer and Cain relic. If you're gonna do a set like this, you should have variation from flagship, and this set...sort of does? There's enough that's different to make me feel like I got something from this, but there's still a lot of reused base.

Still...I enjoyed myself. Which, at the holidays, is all one really needs.
Posted by Jordan at 10:15 AM
Labels: 2018, Blaster, Holiday, Topps