Say Goodbye to Hollywood (Round Two) 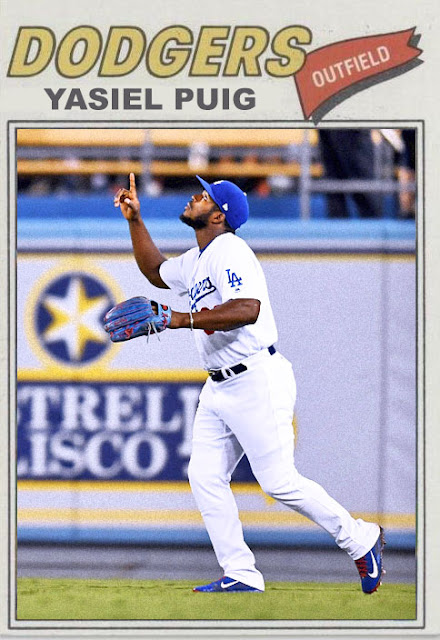 Last year, the Dodgers made a huge move that...was more than just a huge move.

The team sent Scott Kazmir, Brandon McCarthy, Adrian Gonzalez and Charlie Culberson to the Braves in exchange for Matt Kemp. At the time, it was seen as not only a good move for both teams, but, most importantly, a salary dump. The Dodgers didn't have much left that Kazmir, McCarthy or A-Gon could give them, and the Kemp contract was turning into a game of hot potato between teams that wanted to rebuild. As it happened, the Dodgers won out, as Kemp had his best numbers since 2012, and started an All Star Game. While Culberson became a fantastic bench bat for Atlanta, McCarthy gave modest starts before getting injured, and Gonzalez and Kazmir never got to be Braves.

Since it worked so well for the Dodgers in 2018...they went for round two. Once again, the Dodgers let go of Matt Kemp, along with Yasiel Puig, Alex Wood and Kyle Farmer, sending them to the slowly rebuilding Cincinnati Reds in exchange for two prospects and Homer Bailey.

Once again, this was a contract and salary dump, as both teams had people they were tired of waiting for numbers on (Kemp and Puig for LA, Bailey for Cincy). This was also a case of the Dodgers giving contracts to a team ready to compete, in exchange for essentially nothing.

The most important factor that I'm getting from this is that the Dodgers felt they could win games in 2019 without Kemp, Puig or Wood. And let's examine that. A Dodgers outfield without Puig or Kemp still has Max Muncy, Cody Bellinger, Joc Pederson, Enrique Hernandez or Andrew Toles in play, all of whom could make a great three-man outfield (though it'll likely be Bellinger-Joc-Hernandez). This also means the Dodgers could be freeing up outfield and salary space to go after Bryce Harper, which could definitely happen. Plus, a Dodgers rotation without Alex Wood still has Kershaw, Hill, Buehler, Maeda, Stripling, and...now the possibility of a healthy Homer Bailey. Wood has been fantastic, but the rotation isn't dead without him.

Now, is the Reds' rotation better without Bailey and with Wood? Of course it is! Wood, Tanner Roark, Tyler Mahle and Luis Castillo is a relatively decent four-man rotation team, with occasional input from Anthony Desclafani in between DL stints. And is the Reds' outfield better with Kemp and Puig alongside Scott Schebler?? Of course! Jesse Winker and Phil Ervin are fine, but they'll be better coming off the bench, supplanting these two.

The surest sign that the Reds won this trade is that they got these three players (four if you count Farmer, who'll essentially be Curt Casali's backup I think), and they didn't give up Nick Senzel, the big prospect they've been trying to protect all winter. So it proves the Reds are making a run at 2019, which, judging by how fun they were in 2018, is a good sign.

And for the Dodgers...it just means they're clearing room to be even better in 2019. And to potentially land one of the biggest free agents on the board.