A Birthday Blaster of 2021 Topps Archives: A True Bullseye 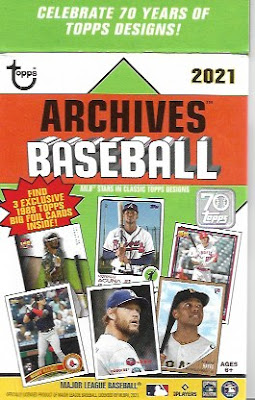 So...I'm not collecting Archives this year.

I've made it a point to collect the base sets of every Archives set Topps has put out, mostly because I like the concept and the relative collectibility. For years I've begged Topps to take away the needless SPs that make the set even harder to complete, and for the 2021 set they finally did.

However, it's 2021, and it's impossible to find affordable cardboard anywhere, especially on retail shelves. I'm collecting the 2020 set, but I got a cheap enough hobby box of it last year, and attacked singles online. I don't think I can do that this year, so I'm just gonna collect what I can. I'm getting my Yanks and Phils thanks to a recent group break, that'll be the extent, I guess.

This has nothing to do with hell occasionally freezing over, though.

My dad was in Target the other day and he found a blaster of Topps Archives...just sitting there. Unattended. No gun-toting southerners, no mandated abstinence. You could just...buy a box of Topps product at a Target. Imagine!

So he got it for me, cause I had a birthday coming up, which is tomorrow. And he figured that'd be a good enough pick me up. The man had no idea what lay inside this retail blaster. And I was very grateful once I found out what was. 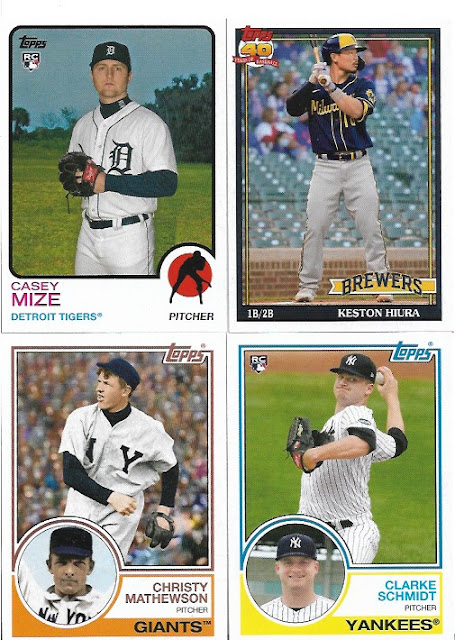 Pack 1- Eight designs instead of 3. That kinda threw me off. And they're not evenly cut in the base set as well. It's kinda tricky. Hey, whatever they want.
It's Archives, so it should be a well-oiled machine by now. The 83s work, the 91's are excellent likenesses, and the 73s are slightly flawed, but work. Plus, cool pulling a New York Giant in 2021. 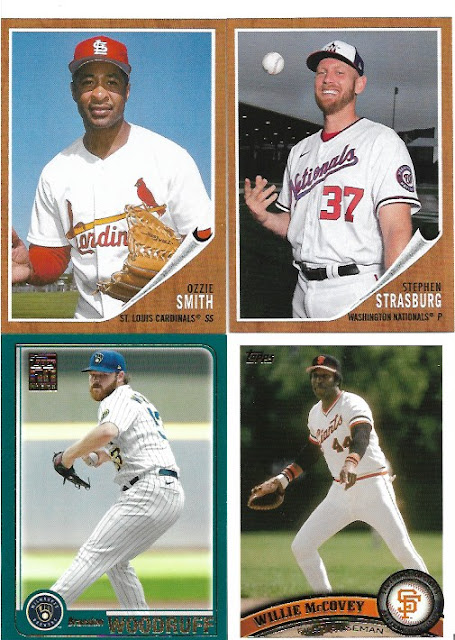 I think they did a good job with the 62s, and both the 2001s and 2011s are recent enough to look cool. Especially the 2011s. But mostly it's just cool to pull new cards of Ozzie and McCovey. 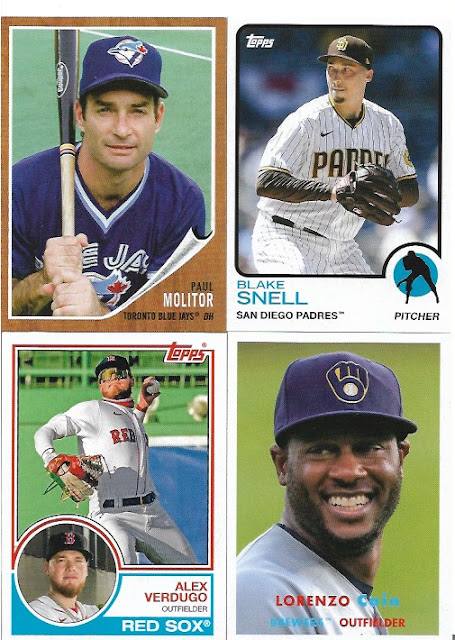 Pack 2- The 57s are a bit too minimalistic imo. But the occasional cool photo selection, like Cain's can save it. Great to see Molitor as a Blue Jay in between his many Brewers modern issues. 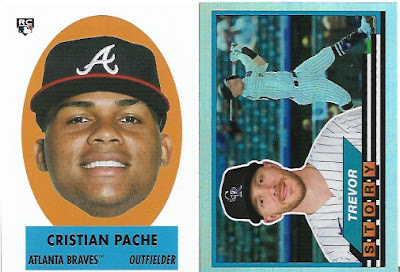 Inserts! Pache's is a Pop Up insert, which they had in Heritage a few years back. Could have used someone who could stay up in the majors, but hey, still cool. And Story's is a retail-exclusive 89 Big Foil, which is a nice design homage with some requisite shininess.

Three more HOFers. Always great to pull a Clemente. Killebrew's is a Topps 2091 subset, a very silly idea that's cooler than one might expect. It honestly looks like a lost Topps Bunt design, if that set hadn't turned into Topps Big League [sidenote, when is 2021 Big League releasing? Next decade?]. 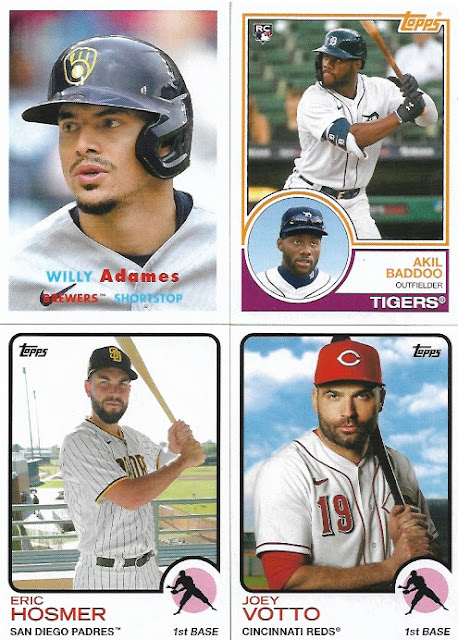 Pack 3- Business as usual, aside from Votto's look of seduction. Adames is proof of updated uniforms in this set, something that not even Topps Update could muster. 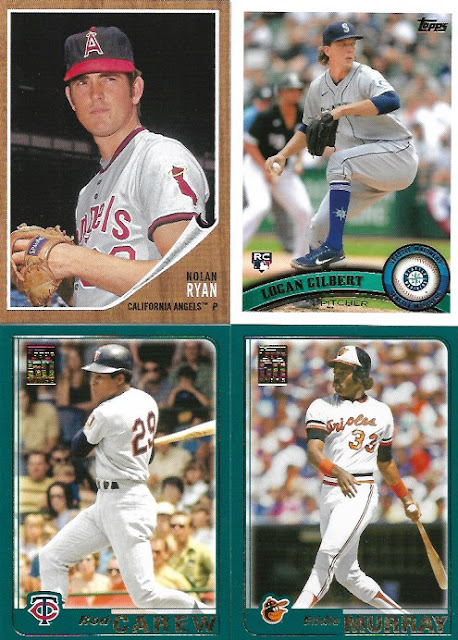 Three Hall of Famers and a Mariners rookie. Carew and Murray look awesome on the 2001 design. 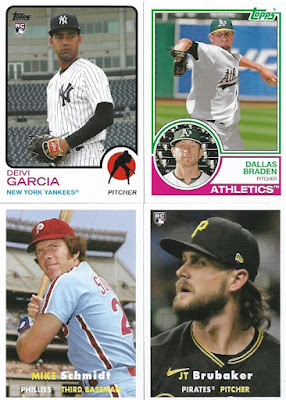 Pack 4- Deivi Garcia may never pitch like we wanted him to, which is sad. Dallas Braden became such a fan favorite as a baseball personality and broadcaster that he landed in this base set, which is cool. Do Phil Hughes next. Always a joy pulling a Michael Jack, especially an early-70s one. 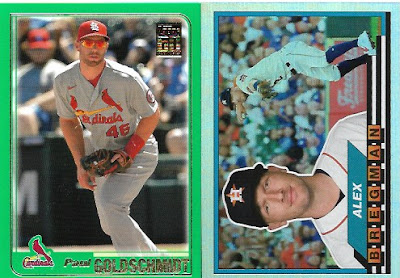 So we hit a parallel in this pack. Yes, it's a Cardinal, which...my luck, of course it is. But it's at least a respected, long-standing veteran Cardinal in Paul Goldschmidt. It's a green parallel, #'d to 125. Not bad at all. Those come 1:62 retail packs, so I beat the odds. Which would have been nice enough.
And my second 89 Big Foil was someone who I respect less than Goldy, and that's Alex Bregman.

A HOFer and two rookies that barely played this year polish off the pack. 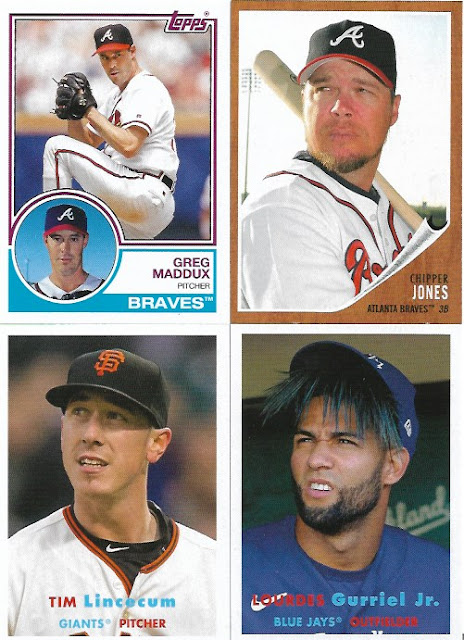 Pack 5- Three retired stars, and also a very awesome photo of Lourdes Gurriel and his blue hair. Lincecum's inclusion in this set I can see, but this is 2012-era, post-awesome Lincy, rather than shaggy haired Lincy. Maddux and Chippah in the same pack feels right. 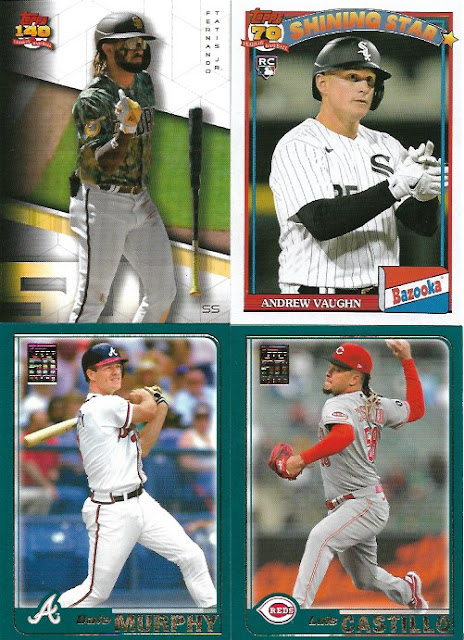 There was an insert here, a 91 Shining Stars of Andrew Vaughn, but it's not exactly a huge hit. So I looped it with the rest of the base from this pack, including a cool Dale Murphy. 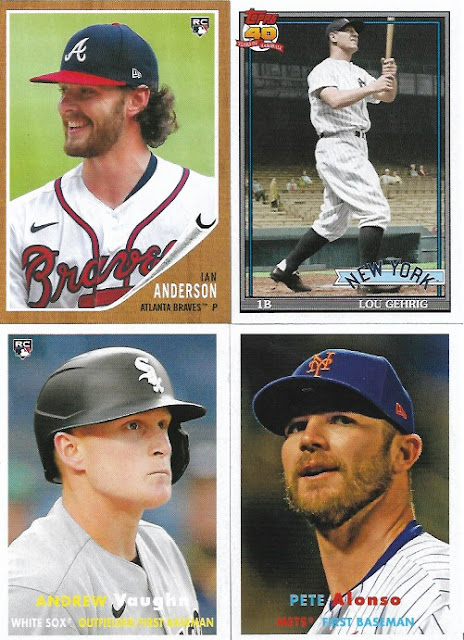 Pack 6- Vaughny shows up again, alongside some standard picks, and also the Iron Horse, fitting pretty well in 91T. 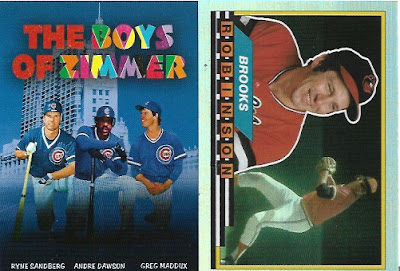 They made the Posters inserts rather than SPs, which works, though they're now multi-player, and therefore harder for me to collect. This was a cool one for the 80s Cubs, though. And my 3rd and last 89 Big Foil was Brooks Robinson, a great subject for one.

Some pedestrian choices to round out the penultimate pack. 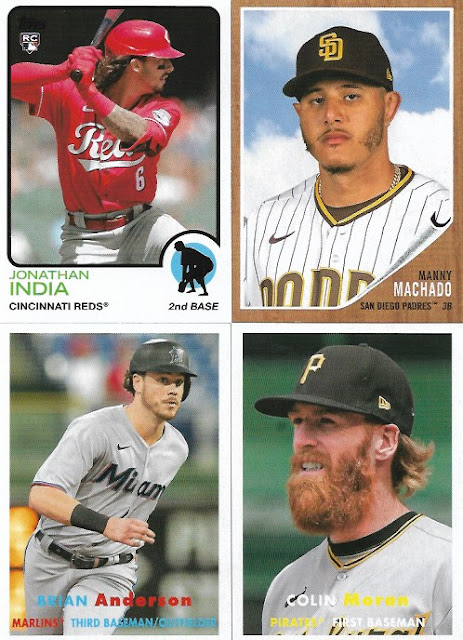 Pack 9- Easy ones. I like the India, and the Moran choice, but these were the kind of cards I expected out of something like Archives.
...and then, 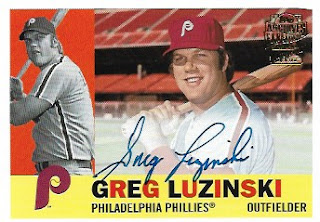 So.
I mentioned sometime last year how rare it is for me to not only pull autos out of retail, but to pull autos out of retail of people who play for my teams and are actually good, well-tested players. Pulling a Hoskins auto out of 10 out of Stadium Club last year fell into this category. I pulled a Joe Pepitone auto out of Archives a few years ago, and a Polanco auto last year.
This...is a little different.
Greg Luzinski isn't just a Phillies hero, he's a Phillies legend. Played for some epic Phils teams back in the day behind Mike Schmidt, hit a ton of homers for us, nearly got an MVP in 75. Legendary. He has his own BBQ stand at Citizens Bank Park, Bull's BBQ. Admittedly never had any. Boog's I've had, but not Bull's.
So pulling a Bull auto, in the Philly area, being a Phils fan...that's just nice. And for my birthday. AND out of a blaster my dad found when he wasn't expecting to.
There's a 1:73 chance of pulling an auto out of a blaster of Archives. Combine that with the green parallel means that this blaster was a 1:4526 find. Not quite the one in one and a half million SC box from last year, but still really damn good. One heck of a hit, and something that made it all worth it.
Oh yeah, rest of the pack,

Trio of rookies. Of the three, I think Weathers might have the longest career, though I'm still holding out for Mickey Moniak to be anything like what we drafted him for.
And that's the blaster. One heck of a find, right? A killer parallel, an AWESOME auto, and lots of fun base things. Worth everything. Might not find an Archives blaster as good as this one.
Posted by Jordan at 9:08 PM
Labels: 2021, Archives, Blaster, genuinely good hits