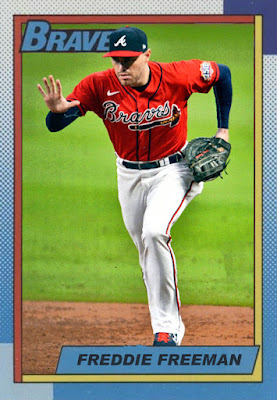 And also the Braves won the World Series. That's what we were talking about right?

[mrreghh...this is the last time they schedule a pivotal World Series game on an election night, I swear ta..]

Anyway. Despite going into Houston, where the things the Astros use to cheat are, the Braves shut out one of the most powerful offenses in baseball, on the strength of mostly Jorge Soler and Freddie Freeman, and brought home their first World Series since before I was born. It was a great moment for people like Freeman, Charlie Morton, Will Smith, Eddie Rosario and Adam Duvall, and for Brian Snikter, that overshadowed the fact that this was a pretty boring World Series overall.

Am I happy for the Braves fans, and for Freeman? Yes, yes I am. But this is also another year where a team got hot midway through the season and rode that all the way to the end. It happened with Washington, it happened here. The way the current playoff model works, the best teams in each league don't regularly make the World Series anymore. If this were 1960s rules, we'd have a Giants-Rays World Series and we'd be fine with it. But because so many rungs have been added to benefit underdogs like the Braves and Cardinals, we had to settle for another team with a bland regular season record winning it all. Maybe it's good from a storytelling perspective, but the game has evolved past the art of...doing well in the regular season.

It's...mind-boggling. And there's a good chance that we're a month away from a lockout, which could lead to even more outages of content. So much is flawed and needs to be fixed, yet a lot of my world revolves around baseball continuing as normal. It's a very balanced issue.

I'm happy for the Braves. I'm happy that we got a happier outcome than the Astros winning again. But I'm still not content with a lot of what the game has become. And I'm not holding my breath for it to change dramatically, either.