Topps Cards That Should Have Been: 2007 Dodgers 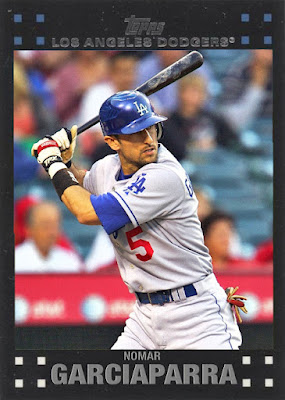 We start with the big takeaway. I've documented on here, once or twice, the struggle of having the last three years of Nomar Garciaparra's career blacked out by Topps' lack of a contract for him. I've made cards of him from 2008 and 2009, and now I'm finally doing a 2007 Topps one. It's an important one, because in 2007 I was just getting into the hobby, and had a knowledge solely based off of 2003 and 2004 era MLB stars, and wanted to make sure they were all still around. And I found 2007 Topps issues of people like Chipper Jones, Randy Johnson, Frank Thomas, etc, and I wasn't finding any of Nomar, yet was reassured that he was still playing. I only found out about the contract thing later.

So, here's Nomar's 2007 Topps card. It commemorates a statistically down year, where he'd hit .283 and 59 RBIs over 121 games, but struggle mightily in WAR and on defense, leading to a diminished role in the 2008 team. Still, it happened, and now the Topps card is out there. 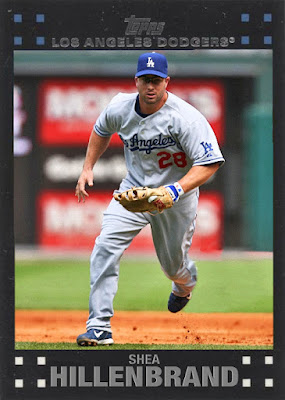 As for other former Red Sox All Stars that popped up in LA in 2007, you also have noted ass Shea Hillenbrand, who'd essentially yapped himself out of a career. Hillenbrand had argued himself out of two straight contracts, one with Toronto and one with Anaheim, and had demanded to be traded from both. After leaving the Angels, he nearly came up with the Padres, but he was stuck in the minors there, so he tried the Dodgers, where he did play 20 games, hitting .243 with 9 RBIs in that period. These would be the last numbers of Hillenbrand's career, as no one would want to sign him after this. Though, can you imagine Hillenbrand and Jeff Kent in the same infield? Assholes are like magnets, they either attract or repel, and I wanna know how they did. 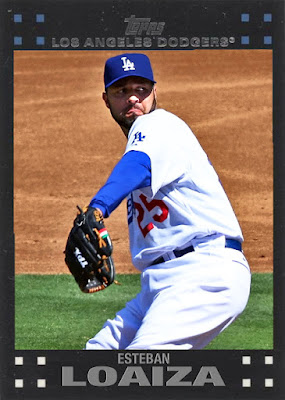 Speaking of assholes [man, Nomar may be one of the few genuinely alright people in this post], noted coke baron, drag-racer and guy who may or may not have paid off a guy to crash his wife's plane before the divorce settlements were finalized [ALLEGEDLY] Esteban Loaiza, also played for the Dodgers in 2007. After starting two games for the A's, and doing relatively well, the cloudiness of Loaiza's speeding charges led to him being benched and waived. After the Dodgers picked him up, Loaiza started 5 games for LA, losing 4 of them, and walking away with an 8.34 ERA. He would re-sign with the Dodgers for 2008, and become mired in the LA celebrity scene [where he'd meet said airborne wife], but would fizzle out after that. 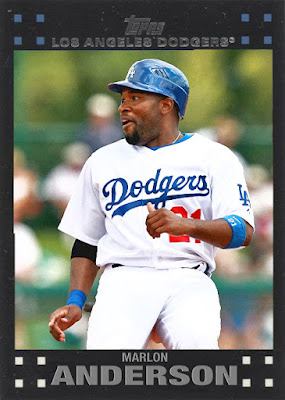 And finally, former Phillies outfielder Marlon Anderson was still bopping around in '07, and after finishing the season with the Dodgers in 2006, he stayed on as an extra outfielder for the first few months of the season. While he was used mainly as a defensive substitution, he had 6 hits in 23 games. Eventually, though, he was released by the ASG break, and would sign with the Mets, who he WOULD appear on a 2007 Topps card with [man, remember when Update's deadline was at the right time?].

Tomorrow we go back to 2006 to talk about a few Giants who really should have been documented by Topps.

Labels: 2007, Dodgers, Nomar Garciaparra, Shea Hillenbrand, Topps Cards That Should Have Been