Topps Cards That Should Have Been: 2005 Mariners 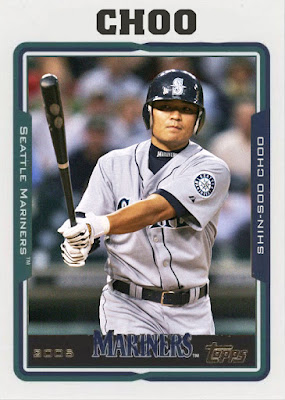 Not much publicity was made about Shin-Soo Choo when he was with the Mariners. They brought him up, gave him some opportunities, then when there weren't any, shipped him to Cleveland. As odd as it was for the legendary Indians, Reds and Rangers outfield bat to be a Mariner for a bit, it's one that I wish popped up on cards more often.

But, 10 of the 14 games he'd play in Seattle would come in 2005, a semi-transitional year for the oft-middling club. He wouldn't have the greatest 10 games either, hitting .096 with only 1 hit and 1 RBI in this period, before being sent back down again. Thankfully, his best contact numbers would come after 2009. I hope he's still doing alright in the Korean leagues, and even if a return to the US would be unlikely, it'd be cool to see him back here. 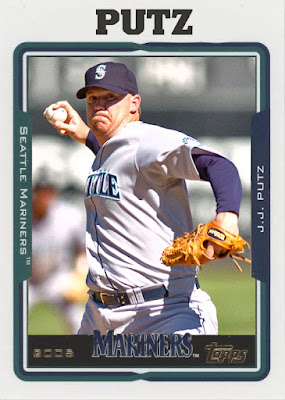 On slightly more normal Seattle shores, J.J. Putz had another solid bullpen year in 2005, and because he wasn't closing, Topps shrugged its shoulders. Putz appeared in 64 games and had a 3.60 ERA, with his best season to date, and putting in a major audition to take the ninth after Eddie Guardado would vacate the position the following year. Putz would have a long career, in and out of the ninth. 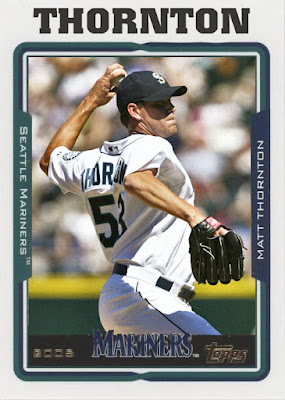 Another adept bullpen arm that didn't get a 2005 Topps card was Matt Thornton, a second year relief piece who, while bulging to a 5.21 ERA in 55 games, still showed consistency and availability, paving the way for several seasons of great relief work, culminating in some excellent seasons with the White Sox. 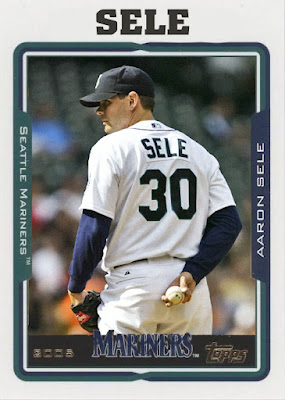 Onto some stranger cases. A lot of people forget about this, but after his lauded Mariners and Angels runs, former Red Sox prospect Aaron Sele continued to bop around for a little while longer, with diminishing uses. In 2005 he was still being used as a starter by his former team, the Mariners, who he linked back up with after the Angels deal lapsed. He did alright, with a 6-12 record and a 5.66 ERA in 21 games. He was eventually phased out of the rotation in favor of some young kid named Felix Hernandez, and would continue searching for playing time for 2 more seasons. 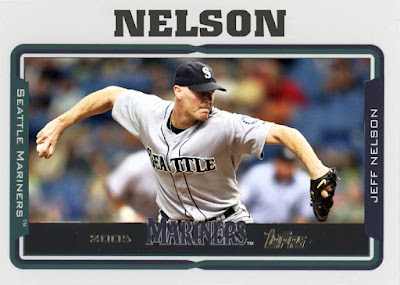 One of the single best relief pitchers that most baseball fans have never heard of is Jeff Nelson. Bold statement, I know. But his work with the Mariners and Yankees from the 1990s until 2003 is largely some of the most consistent relief work of that period. Nelson was around for all four Yankee WS rings, and is still regarded as New York legend. By 2005, he was coming off a rougher season with Arlington, and came back to Seattle, who'd always done him well. He responded with the last great season of his career, with a 3.93 ERA and 34 Ks in 49 games, a level of consistency that not only matched up with his younger peers, but was equally impressive for a 38 year old. He'd get some playing time in Chicago the following year before hanging them up.

Pat Borders' story after leaving Toronto is strange. Guy was a huge piece for a WS-winning machine, a great catcher for a few years in the early 90s, and after that he...completely disappears. In the remaining 11 seasons of his career, he'd play for 8 teams, average about 40 games per season, get work mainly as a backup, and just sort of...be in the background of other great MLB stories. The one team that did enjoy bringing him back as an option in his late 30s was the Seattle Mariners, and in 2005, with injuries to multiple catchers, Borders got more playing time than he'd had in years at age 42, with 39 games, and a .197 average and 23 hits in that time, all while being an average catcher. For the last numbers of his career, they were relatively dignified, and Topps would even give him a Heritage release in 2006. Just not a flagship card.

Tomorrow, some Marlins that should have been in 2014 Topps, including some players that really should have appeared on a card in those uniforms.