Topps Cards That Should Have Been: 2006 Twins 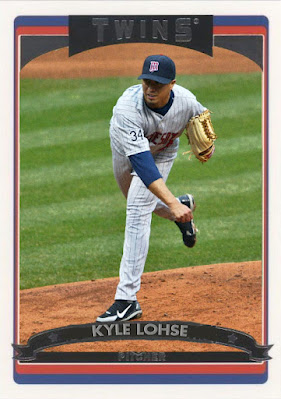 A lot of this coverage of the 2006 Twins is made up of 'why bother making a card now' guys that I've already showed 2007 cards of. One of these is actually a startling omission. Kyle Lohse has a card in 2006 Update as a member of the Reds, but Topps failed to make one of his starting team, one he'd been with for years, the Minnesota Twins. In 22 games he had a 7.07 ERA, with 5 losses, and only 8 starts, being moved to the pen afterwards. He's sent to the Reds in a deadline deal, improves his velocity, and slowly becomes a favorite in St. Louis and Milwaukee. 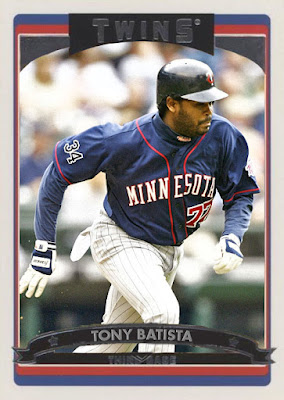 I talked about Tony Batista and his paltry Nats numbers a week or so ago, but in 2006 he was coming off a year where he was supposed to be a National but was injured the whole time. Even if he was healthy in 06, his career was rapidly going downhill after his stellar 2002, and the Twins were left with some meh numbers. In 50 games, Batista hit .236 with 21 RBIs and 5 homers. Not terribly interesting. 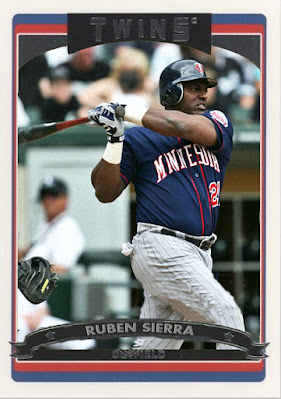 And after a few seasons being a bench/DH for the Yankees, Ruben Sierra played his last 14 MLB games as a member of the Twins, trapped behind Jason Kubel and Michael Cuddyer. The 40 year old hit .179 with 4 RBIs and no home runs. As discussed, he'd try the Mets in '07, and it wouldn't go much better.
Tomorrow, we go to 2008 to catch up with some unsung pitching White Sox.
Posted by Jordan at 1:18 PM
Labels: 2006, Kyle Lohse, Ruben Sierra, Tony Batista, Topps Cards That Should Have Been, Twins