Topps Cards That Should Have Been: 2014 Diamondbacks 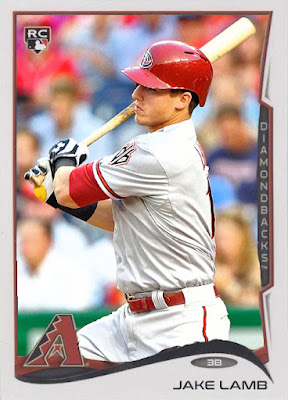 We begin this trip back to 2014 in Phoenix with, like the Cubs post, some players who did not make the rookie cutoff that Topps and the MLBPA stupidly agreed on, one that is insinuating that Randy Arozarena, who played games in 2019, is a rookie this year.

Jake Lamb made his debut in August, and was one of a few highly-touted infield prospects the D-Backs had on their hands. In 37 games, he hit .230 with 11 RBIs and 4 homers, a far cry from his 30-homer seasons he'd hit towards the middle of the decade. 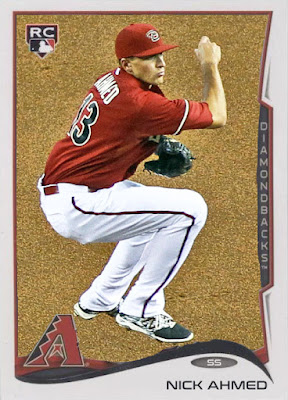 Similarly hitting the learning curve in 2014 was Nick Ahmed, whose numbers don't even include the defensive spike he usually brings in. In 25 games he hit .200 with 14 hits, nothing too special, and was mostly used as a defensive sub. The team didn't have room for him yet, but they would starting in 2015, where he'd become one of the more indispensable infield tools for the D-Backs. 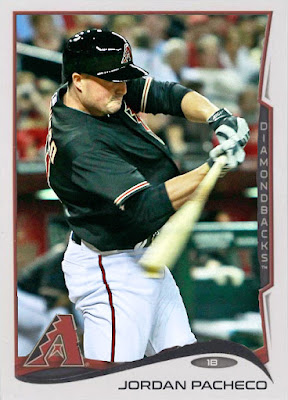 Jordan Pacheco was blocked in two places in Colorado. At first base, he was blocked by Todd Helton, and then Justin Morneau. At catcher, he lost the gig to Wilin Rosario. With nowhere to play in Denver, he was waived by the D-Backs, where he played a predominantly more 1B-centric role in the team, as a backup to Paul Goldschmidt. He hit .272 in 47 games, with 8 RBIs and 22 hits, and got them to the end of the season. The team would bring him back for 2015, with less impressive results. 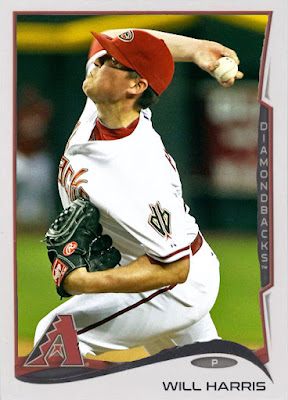 2014 was the season immediately before Will Harris's trade to the Astros, and the subsequent resuscitation of his career. To this point, Harris had bounced around between Denver and Arizona, and was a decent relief piece. In 2014, he had a 4.34 ERA in 29 games, with 35 Ks, proving that the consistency was there, he just needed a better team. And starting in 2015, he would get one. 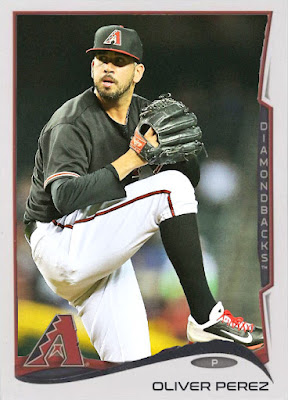 2014 also lands in the 'we don't want to make cards of Oliver Perez for some reason' era of Topps baseball. So another great relief year by Perez would go unnoticed. In 68 games with the Diamondbacks, Perez would sport a 2.91 ERA and 76 Ks, bringing the eyes back upon him, and setting the stage for great future seasons with Washington and Cleveland. 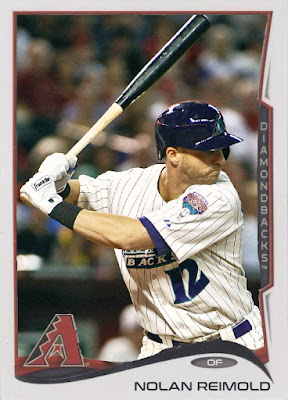 The strangest one of the bunch was Nolan Reimold, best known for his years with Baltimore. 2014 was the only MLB season Reimold spent away from Baltimore, as he was waived by the Blue Jays before the season, played decently, then found himself grabbed by the D-Backs, where he would play SEVEN games. In those 7 games, Reimold would hit .294 with 4 RBIs and a homer, not a bad stretch at all. PLUS, he'd also wear a nice 2001 throwback, which are always welcome on this blog. But, after the season, he'd return to the O's to play the last 2 seasons of his career, making 2014 a strange blip on the radar.

Up tomorrow, some interesting LA cases from 2007.

Posted by Jordan at 11:13 AM
Labels: 2014, D-Backs, Jake Lamb, Jordan Pacheco, Nick Ahmed, Nolan Reimold, Oliver Perez, Topps Cards That Should Have Been, Will Harris