Topps Cards That Should Have Been: 2005 Braves 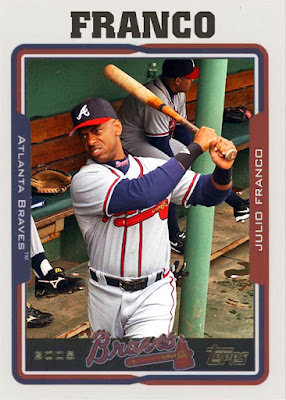 As the 2021 Braves celebrate their championship season, let's go back to a humbler time for the team- 2004, after their division title and botched playoff attempt, when they were beginning to shed their late-90s cred and morph into a more middling squad for a few years.

One of the perennial stars of these mid-2000s Braves teams was Julio Franco, who had been a crucial bench piece for Atlanta since returning from Korea in 2001. Franco played over 100 games a year for the Braves from 2002 til 2005, which is a pretty bold claim for a guy in his early to mid-40s, who had played alongside Toby Harrah, Gorman Thomas and Bert Blyleven as a rookie. After a strong 2004, '05 was a step back for Franco, who hit .275 with 42 RBIs, including a second-act-high 9 homers, in 108 games. This would be his last full year in Atlanta, but he'd come back in 2007 for a stint that Topps would also fail to document. 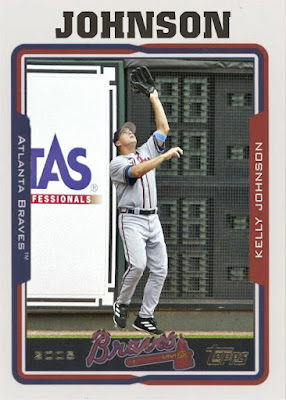 We also have two big-deal rookies for the Braves in '05 that Topps ignored. One was Kelly Johnson, who'd become a big piece of the Braves' late-2000s teams. In his rookie campaign, Johnson hit .241 with 40 RBIs and 9 homers [...that's kinda similar to Franco's], and had a 1.4 WAR over 87 games. Though he'd miss all of 2006, he'd become a staple in the seasons following. As would another rookie, Brian McCann, who also made his debut in 2005. McCann played in 59 games, mostly as a backup to Johnny Estrada but also as injury insurance, and made his case known pretty early on, hitting .278 with 23 RBIs and 5 homers in 59 games. Perhaps a bit lower-key than the following six straight All Star seasons, but definitely a solid start to a long, impressive career for the Braves.

Tomorrow, we stay in the same year, but cover a lot of very strange additions to the fold in Milwaukee.