Topps Cards That Should Have Been: 2014 Marlins 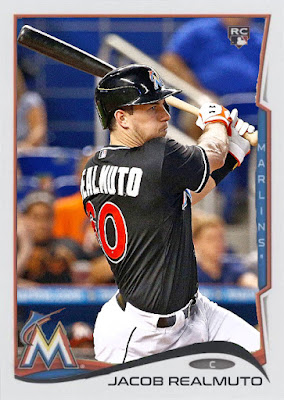 I will give Topps credit for a few things in 2014 regarding the Miami Marlins, who were still mostly bad at this point. They actually did make Marlins cards of Rafael Furcal, Donovan Solano, Randy Wolf and Reed Johnson, some fringe guys who, if they hadn't done flagship cards of them, I'd have to.

However. It still left some very important work for me to do for 2014. VERY IMPORTANT WORK.

For instance. Two of their biggest rookies of the 2014 season came in after the cutoff. One of them has become one of the best catchers in baseball, and that's J.T. Realmuto. In 2014, he was still going by Jacob, and still trying to break in behind Jarrod Saltalamacchia. In 11 games, he hit .241 7 hits and 9 RBIs, not a bad ratio whatsoever. It was a prelude to the next several seasons of excellent catching and hitting we'd see from him. 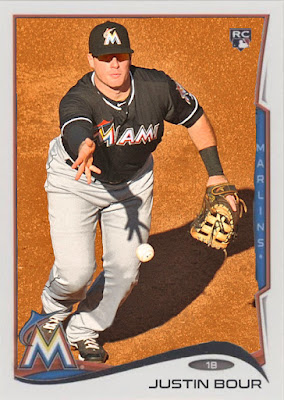 Jeff Baker and Garrett Jones got cards as Marlins, but the guy who would actually get the 1st base job in Miami, Justin Bour, also didn't make the cutoff. He had a stronger rookie debut than Realmuto, with a .284 average, 11 RBIs and 21 hits in 49 games. His numbers would dilute over time with the Marlins and he was last spotted hitting .170 in the Korean leagues. 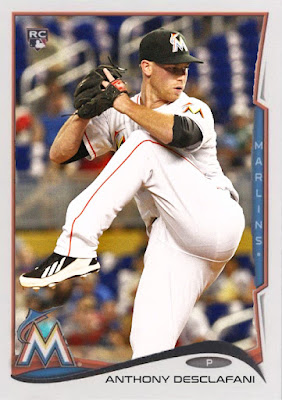 As for another Marlins rookie who didn't make the cutoff, Anthony DeSclafani had 13 games as a Miami Marlin, which a lot of people forget after his tenures with the Reds and Giants. He started 5 games, and struggled in that position, with a 7.40 ERA and 2 losses. He'd fare better as a bullpen piece. After the season he'd be traded for Mat Latos, become an option in a dead Reds rotation, and the rest would be history. But he is one of those players whose early uniform is so unfamiliar that I wished Topps would have done something with it. 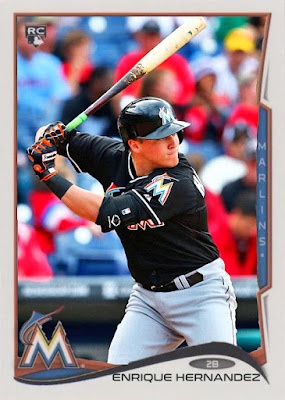 Same with this guy. Like with Disco, Enrique Hernandez' Topps cards begin after his trade to a better market, in this case being Los Angeles, but Hernandez' time in Miami is thanks to a trade that brought Jake Marisnick and others to Houston. So already Topps missed his Astros tenure [and I'll get to that eventually], but they also missed his 18 games in Miami. Because he hadn't BECOME Kiké Hernandez yet, his numbers weren't great, he hit .175 with 6 RBIs and 2 homers, but his defensive numbers are what caught the eye of the Dodgers, and led them to trade for him when dealing Dee Gordon. 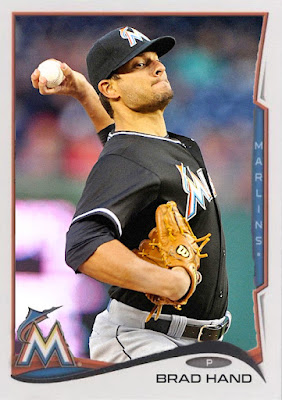 Brad Hand had cards in the previous two Topps sets, so as he was settling into a role as a modest reliever, Topps thought they didn't need to make cards of him as often. So they missed Hand's 2014 season, where he had a 4.38 ERA and 67 Ks in 32 games, 16 of which were starts. Once he'd become a full time reliever he'd blossom, take the ninth, and, yes, get more Topps cards. 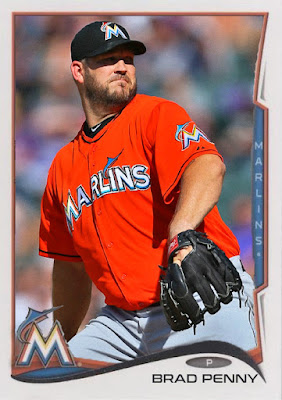 With a visual as strange as this, you would think that Topps would have to put it in Update. Brad Penny, 2000s Marlins hero...in 2010s Marlins garb? I talked about seeing Xavier Nady in 2014-era Padres duds, this is just as strange. At 36, Penny was still pitching, though he was nowhere near as powerful as he was in the mid-2000s, and with a lack of great options, the Marlins did start Penny for 4 games. Honestly, his best numbers of the season were in these starts, with a 5.21 ERA and 2 wins. He'd yield 8 earned runs in 4 relief appearances, though, and that inconsistency would lead to his dismissal, and subsequent retirement. For a great career, especially as a Marlin, Brad Penny really should have had a Topps card in 2014. But, alas, he has one here.

Tomorrow, some very strange 2007 Mets that I have been waiting a while to post.