Topps Cards That Should Have Been: 2009 Astros 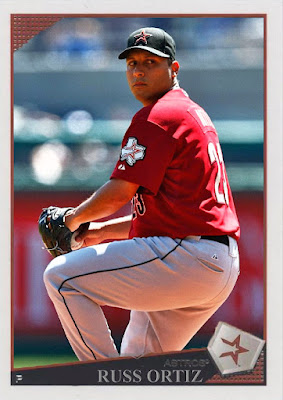 Let's...be very honest with ourselves. If the Astros force a Game 7 tonight, they're gonna win the whole thing. They're at home, surrounded by the things that help them continue to cheat, and oh, the lineup MIRACULOUSLY dried up while they were in Atlanta. If they win tonight, they're winning tomorrow night as well. Nobody'll like it, but...that's the Astros.

So instead, I wanna flash back to when the Astros weren't so hateable, and weren't so good. The 2009 season, back when they were still in the NL Central. Here are some customs of people of note that played for this team. 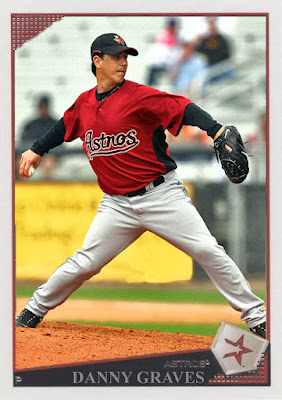 Speaking of bullpen, Danny Graves, one of the more fearsome closers in Cincinnati Reds history, had been bopping around the leagues for a few years, trying to make people's spring training squads with no avail. In 2009, it was the Astros' turn, and while he probably did well enough, there was no place for Graves on a team with Jose Valverde. 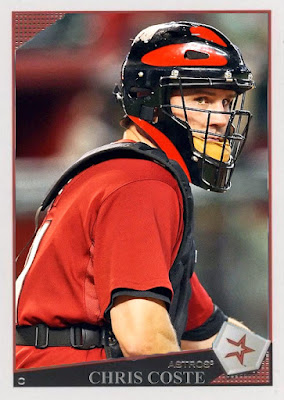 I'm not sure if the story of Chris Coste made it out of the Philadelphia area. Chris Coste was an undrafted MLB hopeful who got his start in the independent circuit, was playing in and around the filming locations for the movie Fargo, where he became a hero over there, then finally got picked up by an MLB team, spent another 6 years in the minors before, upon an injury to Mike Lieberthal, the Philadelphia Phillies finally gave him a chance. His 2006 season, as a 33-year-old rookie, was the stuff of baseball legend, and he was a crucial part of the Phils' 2008 WS run. By 2009, the magic had worn off, and he was backing up Carlos Ruiz, so he was waived by Houston, who were about to lose Ivan Rodriguez and be forced to start Humberto Quintero and J.R. Towles. Coste did alright in Houston, hitting .204 with 10 RBIs in 43 games, but he wasn't worth the risk anymore. He tried some spring training auditions afterwards but never made it back.

Labels: 2009, Astros, Topps Cards That Should Have Been