Topps Cards That Should Have Been: 2006 Giants 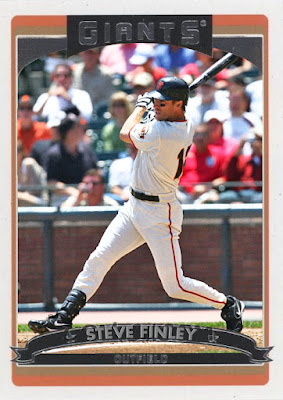 We're gonna start this 2006 Giants post with a guy that really, really should have had a 2006 Topps card with the Giants, and that's Steve Finley. Finley's 2006 Topps card was with the Angels, who he played all of 2005 with, and rather well. The trade was finalized after Series 1 went to print, but Topps did their damndest to sell the trade, photoshopping him, shoddily, into a Giants uniform in Bowman, Chrome and Opening Day. Finley did get a Giants card in Allen and Ginter, but that was it. Nothing in Update. Odd, as Finley was a starting outfielder for the struggling Giants in '06, playing 139 games, but batting only .246 and hitting 40 RBIs. Clearly, at 41, the man was beginning to show his age, and he'd play part of the 2007 season before retiring. 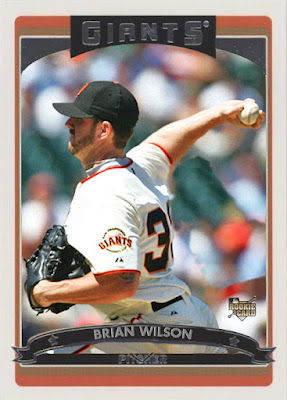 Also a shocking omission from 2006 Update was a rookie card for Brian Wilson, one of the more ubiquitous relief options for the Giants that year. Wilson played in 31 games, and while he sported a 5.40 ERA, he was still becoming a relied upon option, which he'd turn into a closing role in a few years. 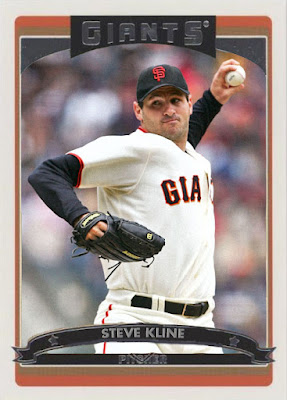 Another piece of evidence that Topps just doesn't like relievers, veteran relief asset and 3 time leader in appearances Steve Kline pitched a beaut in 2006, becoming one of the more consistent relief options that year for SF. In 51 innings he had a 3.66 ERA with 33 Ks, while once again leading the team in appearances with 72. 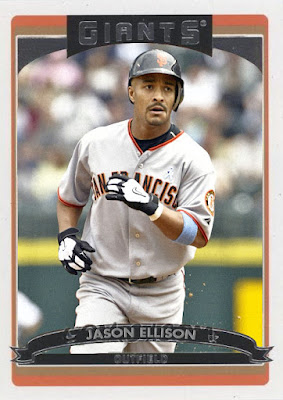 After an impressive season jumping into an OF position, Jason Ellison calmed down significantly in 2006, only hitting .222 in 84 games, his position being mostly usurped by Steve Finley. By 2007 he'd be bopping around various teams in search of one that stuck. None really did. 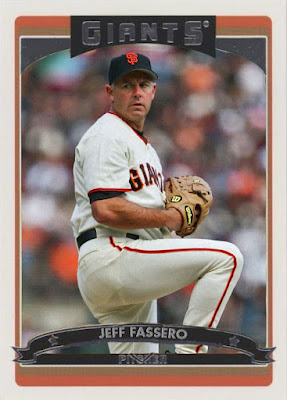 I've been saving the oddest one for last in a lot of these Should Have Been posts, so here's Jeff Fassero, who, at 43, was the oldest man on a roster that included Steve Finley, Barry Bonds and Tim Worrell. The former Montreal and Seattle steady starter had shifted to relief around 2001, and was still getting jobs in places like Colorado and St. Louis as a fine relief long man. 2006 would be his last season, as he'd leave San Francisco with a 7.80 ERA in 10 games, having been deemed no longer unhittable by opposing offenses.

Tomorrow, a couple crucial ones from the 2005 Indians.

Labels: 2006, Brian Wilson, Giants, Steve Finley, Topps Cards That Should Have Been