Topps Cards That Should Have Been: 2006 Rockies 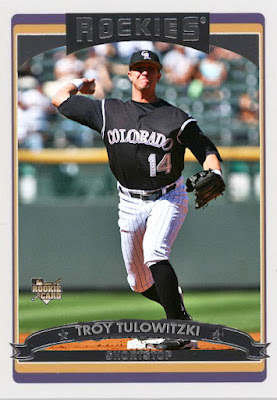 Happy Thanksgiving to all out there! Hope you're all someplace warm and inviting for the holiday. I'm heading to my cousin's in North Jersey later for the festivities. Will the Lions lose yet again? Signs point to yes.
While I'm here, though, I might as well continue the Should Have Been November series, and do the 2006 Rockies that Topps dared not touch. The big one, Troy Tulowitzki, I can sort of understand, as he came up in late August, and would still qualify as a rookie in 2007. Tulo's 2006 numbers weren't much to note, as he hit .240 with 23 hits and 6 RBIs in 25 games. Thankfully, his better contact numbers would come eventually. 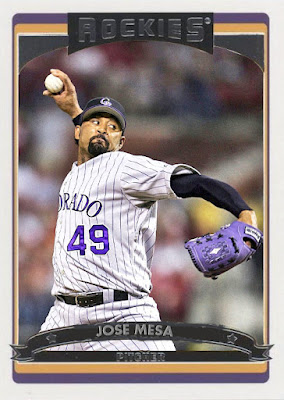 Jose Mesa did technically have a Rockies card in 2006 Topps, but it was a card that pasted a Rockies logo over a Pirates card. No real flagship card actually showed the veteran receiver in Denver, so I made one. Huzzah. Mesa's usual solid setup work carried over excellently to the Rockies, delivering the last truly great season of his decades-long career. In 76 games, Mesa had a 3.86 ERA with 39 Ks and a 1.3 WAR. Not bad for a 40-year-old. Mesa would split 2007 between Detroit and his old stomping grounds in Philly, the latter of which would help him end his career in October. 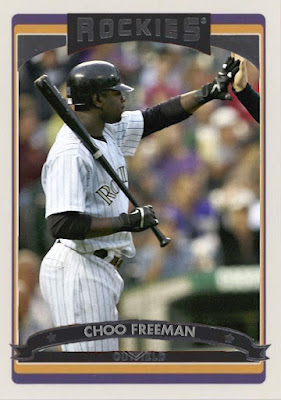 Choo Freeman was a Rockies farmhand for the better part of the 2000s. Fun fact, Freeman was my guaranteed auto in my box of 1999 Topps Traded. I could have gotten Sabathia, Soriano, Dunn, Burrell...and I got Choo Freeman. Freeman had his most prevalent, and last, season in 2006, with 88 games, a .237 average and 18 RBIs. He'd be cut after the season and would attempt camp with the Dodgers for a few years. 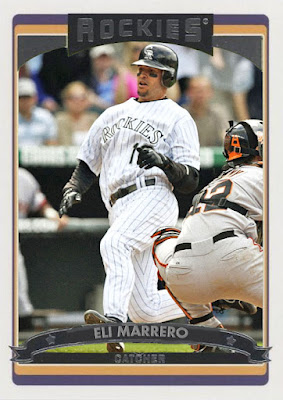 Eli Marrero was only a few years removed from being a catching option for the Cardinals as his career began to wind down, becoming a backup/utilityman with several teams. Marrero split 2006 between Denver and Queens, and in his 30 games with the Rockies, he hit .217 with 10 RBIs and 4 homers. Unfortunately, Yorvit Torrealba and Chris Iannetta rendered him kind of moot, and he'd be off to the Mets. 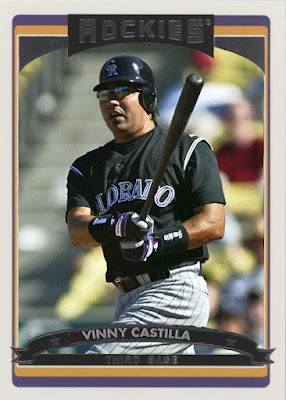 Finally....Topps really could have spoiled us with this one. Come on. Vinny Castilla, a Rockies legend, returning home to end his career? Nothing on that, Topps? Fine. Castilla only played 15 games with the Rox after being cut by the Padres, but they'd be 15 strong games back where he was beloved. He'd only register 4 hits, but one would be his 320th and final home run. So that's gotta count for something.
Tomorrow, we go to 2007 for some dispatches from the Royals team.
Posted by Jordan at 11:53 AM
Labels: 2006, Jose Mesa, Rockies, Topps Cards That Should Have Been, Troy Tulowitzki, Vinny Castilla